The Ups and Downs of #FeelTheBern: A Hashtag Analysis - Locowise Blog

The Ups and Downs of #FeelTheBern: A Hashtag Analysis

To call this year’s race for the Democrat and Republican nominations ‘colorful’ would be the understatement of the century and, in a contest marked by big personalities and even bigger surprises, one of the most captivating stories has been that of Bernie Sanders.

The Vermont senator and self-described socialist swept the nation with his far left platform, scoring some lopsided wins in state primaries against Democratic favorite Hillary Clinton and building an extremely vocal group of ardent supporters. Though at this point it will take a miracle for him to clinch the nomination, there were times when it looked like he might just pull off an incredible upset. Few things exemplified this better than his defiant catchphrase, “Feel The Bern”.

It wasn’t long before #FeelTheBern became a signature hashtag of sorts for Bernie supporters. It represents a sense of triumph and momentum. All wrapped up in a catchy pun – perfect hashtag material. 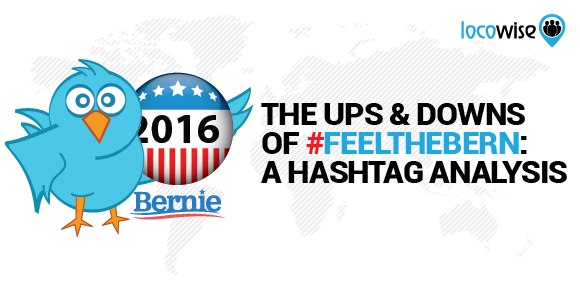 We decided to run a hashtag analysis between April 1st and June 8th to see what kind of insights we could glean from Twitter. In many ways, social media is a reflection of our times; let’s see what it says about the delegate race.

Targeting various demographics is a key part of any successful campaign, and gender analysis gives us a good idea of how Sanders fared among men and women. In the period we looked at, there was a split of 52.8% females and 47.2% males. This comes as a bit of a surprise, given that in America more men use Twitter than women (25% vs. 21% of internet users respectively) and that Bernie’s opponent in the race is, of course, a woman. So much for the stereotypical ‘Bernie bro’, I guess?

What kind of keywords and hashtags were used alongside #FeelTheBern? Aside from the typical ones you would expect, such as #BernieSanders and #Bernie2016, there were a few interesting standouts.

#BlackLivesMatter, for example, was used in 2.84% of Tweets. Almost equally popular at 2.82% was the controversial #BernieOrBust. Meanwhile, #HillaryClinton (3.90%) was actually used less than #Trump (3.96%) despite being Bernie’s immediate competition, which speaks volumes about Donald Trump’s overwhelming presence as a topic of discussion – both negative and positive – on social media.

Since the phrase “Feel The Bern” has such a triumphant tone, it makes sense that it would be used in times when Bernie had more momentum, and a clear pattern did emerge in our date range of April 1st – June 8th.

Namely, a steady decline throughout the period, with daily spikes and troughs often reflecting key victories and losses.

Instances of #FeelTheBern were at their highest in the first half of April when the Sanders campaign looked to be building some serious steam. In each day of this period, there were more than 50,000 usages of #FeelTheBern.

April 5th saw a sudden spike in activity with 62,527 uses of the hashtag, coinciding with Bernie’s convincing victory in Wisconsin where he defeated Hillary 48 to 38 in the delegate count.

The highest point, however, occurred on April 9th with his symbolic victory in Wyoming generating 62,990 uses. Another notable day was the Democratic debate on April 14th, with a surge in #FeelTheBern usage indicating a positive reception to his performance. The lowest point in this period was a still impressive 55,157 uses on April 12th.

The second half of April started off with a large dip in the number of uses, with just 43,677 uses on April 16th. It’s difficult to say what caused this. In fact, it actually comes as a bit of a surprise as this coincides with the New York City March for Bernie Sanders.

Overall, this period saw the number of usages start to fall, with nine days within the period failing to break the 50,000 mark. The lead up to the New York primary saw usage peak at 62,581 on April 18th, when supporters were likely to have been tweeting to encourage people to vote for Bernie.

The second highest peak occurred on April 26th with 62,116 uses. This was a key moment in the race as five primaries were held on the same day. Ultimately, it was a rough day for the Sanders campaign. After losing to Clinton in four out of the five contests – three of them by a wide margin – usages began to slump, hitting a low point of 38,452 uses on April 29th.

By this time, with fewer delegates up for grabs and Clinton still holding a sizable lead, use of the #FeelTheBern hashtag had started to slow significantly – only three days in the period topped 50,000 uses.

That said, there were still notable spikes in activity. Sanders’ lopsided May 10th victory in West Virginia drove a period high of 57,221 while his strong Nebraska showing on May 3rd generated 56,724 uses of the hashtag. Impressive, but markedly lower than spikes achieved during previous victories.

It’s possible that, at this point, each individual victory was beginning to seem more and more inconsequential in the grand scheme of things. This period saw hashtag usage dip as low as 38,490 on May 12th.

The second half of May saw instances of #FeelTheBern continue its downward trend. Only two days had more than 50,000 uses, and both of these fell within the first three days of the period on May 17th and 18th. This is almost certainly due to a strong performance in Oregon, where Sanders picked up 36 delegates to Hillary’s 25.

After this initial burst of activity, however, usage fell dramatically and never fully recovered, mostly hovering within the 35,000 to 45,000 range. May 28th and 29th were particularly slow, with the 28th dipping below the 30,000 mark and hitting the lowest level of activity within the entire period we looked at – a mere 29,890 uses.

By the time June rolled around, the odds of Bernie winning were looking pretty slim. Hillary had already reached the number of delegates needed to win the nomination, and only a few primaries remained. By far the most important was California, and many supporters were still rallying for a big win in the golden state along with a swing in superdelegates to keep Bernie in the race.

On June 7th, the day of the California primary, #FeelTheBern surged to 67,375 uses – overall the most active day of our entire period of analysis. Ultimately, despite their best efforts, Sanders supports were unable to topple Hillary, and the disappointing result gave way to a correspondingly low 37,099 uses on the following day. Millions of Americans had ‘felt the Bern’, but it wasn’t enough. The race was all but over.

The Sanders campaign will go down as one that sent shockwaves through the political landscape and brought long-forgotten socialist ideals back into the mainstream. Despite coming up short, its impact was undeniable and watching it unfold was nothing short of fascinating. With Clinton and Trump set to go head to head in November, things can only get more interesting from here.

Hashtag analysis remains a valuable tool for monitoring trends, within politics and beyond. Need to track the momentum of your marketing campaign? Locowise offers deep hashtag analytics to help you stay on top of the numbers. Try it out for free.