How Disney Managed To Get There First On Social Media (Again)

If there is one brand that others look to for inspiration on social media, it is arguably Disney. Not a simple beast, its social media covers many divisions and even vastly different products.

Disney doesn’t just make movies. Toys, music and TV shows have long been part of the House of Mouse. But in recent years, Disney has developed a social media team that genuinely pushes the envelope on a regular basis. The brand has cornered video in a big way, and now it is working even harder to ensure that social media users don’t miss the content.

Disney has a huge history of well-meaning and positive messages and movies, and this comes across effortlessly in the social media feeds associated with the brand. 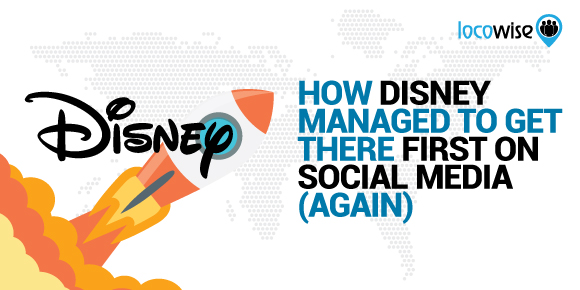 Disney Baby has been around for many years, and on its Facebook page, there is more of that effortless, well-produced and timely content. Hitting the button perfectly, when Father’s Day recently happened, the Disney Baby Facebook page was there with one of the best ways to use social, to share a message around a celebration. Oh, and nothing was being sold.

Of course, this focused on the famous fathers in Disney movies (example from ‘Finding Nemo’: Marlin is one determined and brave father. When Nemo goes missing, Marlin puts his fears aside and harnesses the courage to go out into the world and find his son.’), so the piece is promoting Disney product. But at all times, the product is simply expressing a core Disney message. Marlin definitely did put his fears aside, and that’s a key concept from all Disney work.

Disney has made no secret of its desire to use social media effectively over the past ten years or so. It has made a clear effort to share information first, and the product details second. But we’re impressed with how the brand has decided that it can still focus on innovation, even as it has one of the best marketing teams in the world. And a huge budget to boot.

Its latest innovation? Well, imagine that you had your hands on the best budget and the best people, and you still had to justify having a social media marketing team. What would you do?

If you would use the very latest in live social media, you’d be on the right lines. Disney has decided to work on the social media for Cars 3, but it has decided to do so in an incredibly intriguing manner. Once again, Disney is acting like a young and hungry marketing trailblazer, rather than the decades old behemoth it is.

Cars 3 is here, and millions of kids around the world will be looking forward to finding out what has happened to their favorite characters. There will be a ton of merchandise out there, as well as plenty of work on social media. There will also be marketing opportunities all over the place. For this movie, Disney decided to ensure that its social media was better than anything anyone else has seen. So it decided to make the whole thing live.

It went live on Periscope. Social media influencer Brian Hull is involved too, and this is the first real sign that Disney had something special going on. The idea was that viewers joined a special Periscope Live broadcast, and when they did, they were ‘transported’ into a game called PaperCraft Derby. Players made their cars move and speed up by tapping hearts on the Periscope screen. Hull (the influencer) set traps as the race progressed.

This is special and new for a ton of reasons, but we thought we would let Disney itself explain the glory of it all:

Upon entering the broadcast, each viewer will begin receiving direct messages from the car they have been assigned, encouraging them to heart the stream in order to give the racer more fuel. The race can last up to 12 laps. But be careful … it’s not that simple. Hull will be immersed in the race via a VR headset and will be able to activate a series of interactive traps triggered by viewers’ comments, such as oil slicks, paper wringers and a giant fly swatter sitting along the race course.

Tomorrow, tune in to @DisneyPixar & @PixarCars to experience the #Cars3 PaperCraft Derby, the world’s first interactive race on @PeriscopeCo pic.twitter.com/Dgmkwyig7C

All the buttons at once

We have already covered how Disney seems to be able to innovate constantly. But using a live broadcast on Periscope, alongside the use of an influencer, as well as Twitter content like this, means that Disney did not put a foot wrong. The brand has a focus on creating a buzz around events like movie releases, but what made this truly special is that the Periscope event was simply a game that tapped into the excitement around the movie.

Add to that the fact that an influencer brought even more of an audience share, and you have innovation in the concept, increased reach, and a piece of social media marketing that was just great fun.

Is this possible for smaller brands to do? Yes, as long as the brand understands the platforms involved. Disney knew the impact a game would have. It also knew how to use Periscope for maximum exposure. The Twitter campaign before the event used that platform highly effectively too.

We’re looking forward to the next real big Disney movie (Star Wars 8) at Christmas. Expect more innovation then too.

.@ArmieHammer and @Cristela9 survived the #Cars3 Papercraft Derby. Tune in today at 12:30 PT to @DisneyPixar and @PixarCars for your turn! pic.twitter.com/q0d4XWG2Yw

Would you like to be able to offer your clients the ultimate in social media metrics? We thought you would. That’s why we are offering a free seven day trial of Locowise. It’s easy to use, looks great, and makes your social media incredible.