Live Videos Now Stand For 20% Of All Facebook Videos

“We had a good start to 2017”, said Mark Zuckerberg, Facebook founder and CEO, about the results for the first quarter of the year.

In this post, we will look at the announced results and the other news from the world of Facebook.

We will also look at the page likes growth and post engagement stats from the 5,000 pages in our study. 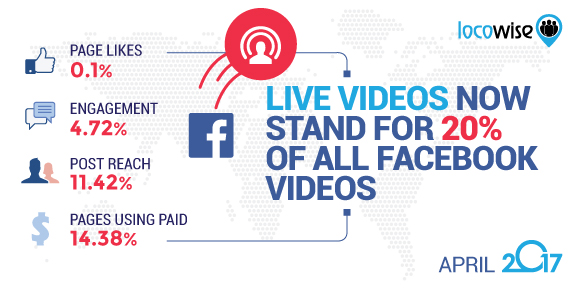 Advertisers spent 51% more in the first quarter ($7.85 billion in total) compared to the previous year, and the company served 32% more ad impressions thanks to its efforts to block the adblockers. 85% of all revenue comes from mobile advertising.

More than 5 million businesses are advertising on the platform every month. This number was at 3 million in March last year and at 4 million in September last year.

Growth and engagement in April

Page likes growth in April was at 0.1% of the total audience. Page likes growth has seen a 41% decrease compared to March and it’s the lowest page growth we’ve seen since May 2015 when we started doing our studies.

An average post reached 11.42% of the page audience in April. This is 9% lower compared to March but the post reach is continuing its good performance since that great 39% bump we saw in February. There might be more good news for post reach. Facebook has debuted “Latest Conversations” feature within its search results that lists posts about timely topics. This feature could allow those pages that post about timely topic to reach a new audience.

Post engagement rate in April was at 4.72% of people reached, which is a 2% decrease compared to March. 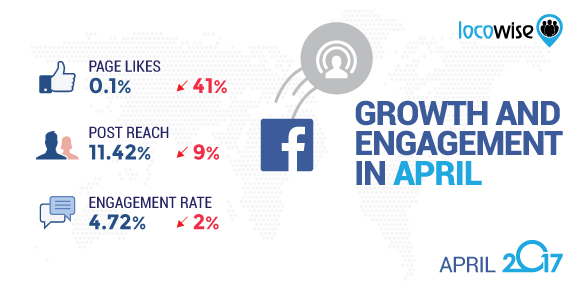 14.38% of pages we looked at used Facebook Advertising in April paying for 33.37% of their total reach.

Live videos now stand for 20% of all Facebook videos

Video continues to be the king of post formats.

Fidji Simo, Facebook’s head of video, has announced that 20% of all Facebook videos are live broadcast and that the daily watch time for live videos has grown by more than 4x in the last year: 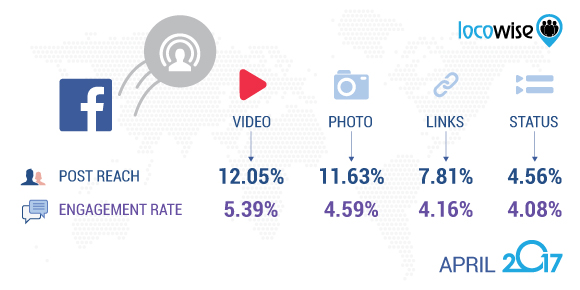 “We’ve focused on making the Facebook Live experience more engaging, more fun, and more social. We’ve added live masks and new creative effects, built features that give publishers more control and flexibility over their broadcasts, and rolled out exciting new formats like Live 360 or Live Audio. And now, one in every five Facebook videos is a live broadcast – and over the past year, daily watch time for Facebook Live broadcasts has grown by more than 4x. Every day, we get to enjoy new use cases for Live that we would never have thought about.”

Facebook is also launching a new ad type called Collection. It allows marketers to add product images to a video ad in news feeds. When the image is clicked, the user gets to see the product catalogue on Facebook and can from there click on to buy the product on the brand’s website.

Our latest Facebook video study was published in April too and it looked at the video activity in the first quarter of the year. In case you missed it, these are the main findings: