Facebook’s Pace-Setters: Brands That Just Keep Getting It Right

If Facebook is still one of the best places to effectively market a brand, the brands that do it right on the platform are worth celebrating. And we have seen some stellar examples in recent times.

The brands highlighted in this post have barely put a foot wrong over the last twelve to eighteen months, and they have seen massive success on Facebook.

We were curious to see if the brands (unsurprisingly, they are all major brands) are doing anything that other brands can learn from. And how are they keeping their game so fresh? 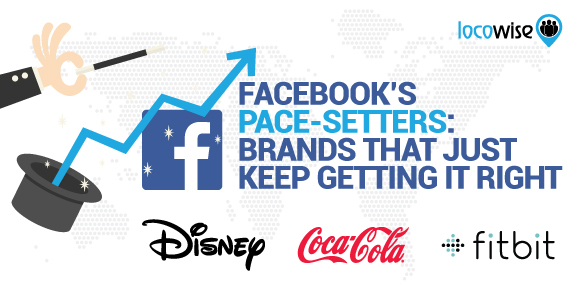 Disney is obviously quite capable of making waves with the moving image, but the work it has carried off in recent times on Facebook shows just how far video can go towards becoming a major force on the platform. There are huge budgets here (and great movies behind the videos) but still, creativity is allowed to shine through. The ideas are exceptional.

Let’s look at the most recent stuff first. Take the bread and butter stuff that shows just pure mastery of video on Facebook.

A Disney movie called Moana came out last year and is now ‘available to own’ on the relevant media in the home. Check out the simple but very effective work in the video, which makes no attempt to do anything other than efficiently explain when the movie is being released for home viewing, using text and image perfectly. There is absolutely no need to have the video with sound.

But they also take it to the next level as a matter of routine. They know their video work is top notch so they make the video section of the page a useful and easy to manage affair. Quite rightly, they also feature a video of the week too. It’s a showcase in the best sense of the word.

Add to this the fact that the brand regularly directs people who hit their page to another channel, such as Snapchat. The entire social media package is joined up and runs smoothly.

Let’s be clear, Disney was a brand way before the Internet. But rather than rest on their laurels, they’ve embraced video, even offering a variety of options included featured video. They’re comfortable in the Facebook space.

And the inclusion of cross-channel elements such as their redirecting to a blog, for example, or Snapchat, shows that they know where their strengths lie.

But the real beauty is the effortless display of video that works. Brands need only follow the same path with video that can be enjoyed silently. Take a tip from how it works for Disney and focus on high end visual messages that hit the fan base in seconds.

If we could stop there, we would. We’re becoming a little envious. There is more, though. The brand is so good at video that they’ve shown a real willingness to ride the trend wave. Humorous videos are big right now, and Disney knows this.

Coca-Cola looking after the people

Coca-Cola has been a leading, huge brand for decades.

But here in 2017, they are still working on ways to engage the audience. It works perfectly, the gigantic brand that is still in touch with the average person.

While it may not be that innovative in the world’s eyes, it still creates memorable content that engages on an enormous level.

For St Patrick’s Day this year, they released a video content piece, one that simply has to be seen to be believed. It’s funny, works on silent mode, and then there’s the little extra feature of the voiceovers changing every time the video loops back to the start.

This is a brand that still feels the need to be innovative.

Put their incredible budget (ad spend was $3.5 billion in 2014) to one side for a second and recognise that, no matter the size of the brand, the principles are the same. The marketers at Coca-Cola not only know that video is powerful, they’re riding the Trend Wave too. This is actively disruptive marketing, not just billions of dollars marketing.

If anything, this brand shows that ingenuity is disruptive, and that disruptive marketing (breaking through the noise) is something that will always result in magic. Anyone can do the kind of video Coca-Cola did for St. Patrick’s Day. And that means there is hope for any brand. If the second biggest player on Facebook (Facebook itself is the biggest) is doing it, they’re not getting lazy, and they recognise the competition. And that provides hope for every brand, no matter what their budget.

The final lesson from Coke here? Be disruptive. It is more powerful than any ad spend.

This is still a new phenomenon on social media, not to mention the world. Fitbit is young and exciting technology that really also doubles as a fashion statement. If you wear a Fitbit, you’re obviously going to get fit and you also look cool.

Their biggest innovation? Offering real, attractive incentives. For example, there is the opportunity to refer a friend to the Fitbit page, if your friend has a Fitbit. It’s little things like this that show they have got their social media hat on, and are trying to appeal to a wide base of fans.

They also buck the trend in content too. While pretty much nearly every brand on social know that it is a great platform for selling, Fitbit has walked away from the selling culture, and focused on good old fashioned content marketing. With advice that really helps people, it becomes a trusted and welcoming place to be.

It’s kind of old school, using content purely for the purpose to inform. Well, let’s be clear, Fitbit doesn’t just inform the audience on how to exercise properly and so on. But the overriding impression is that it makes an effort to offer value.

So essentially, the brand talks less about their tech and more about how exercising can be done effectively and safely.

And that differentiates Fitbit from a number of brands on Facebook. Kind of cool, really.

Don’t get us wrong, there is promotion here, but it’s barely noticeable. Fitbit knows its audience wants to be healthy and fit, so they give them tips to accomplish this. Simple, really, but very refreshing on Facebook.

This means that Facebook is again not just about jaw-dropping videos (not all the time anyway). It’s still about providing real value. And the fact that a brand is delivering this today means it works.

Other brands take note on this one. Facebook is still a place where you can serve people. Fitbit prove it time and time again.

So there we are, three behemoths on Facebook. Still rocking it with innovation and quality even though they have million dollar budgets. They’re setting the pace, and they’re proving one or two points about social media marketing and how it works.

We can see these three brands continuing in this vein. They keep getting it right on Facebook. And at the same time, other brands are benefitting from the lessons they are showing when it comes to marketing. They’ll keep teaching brands how to do it by setting the pace.

And where are they? Just one step ahead of the curve. That’s where they are.

Do you want to have the very best metrics available to man? Don’t look any further. Give your client the edge with beautiful reporting and incredible coverage. Try a Locowise 7-day trial. Today.