Unless you’ve been living under a rock with very weak Wi-Fi signal, the Pokémon Go craze has been utterly unavoidable over the past few weeks. The Pokémon team hinted at something big on the horizon with their #Pokemon20 Superbowl commercial and, boy, did they deliver.

Our CEO Ian Mullane was recounting just the other day how he had seen a crowd of thousands – thousands! – ambling around Santa Monica pier with their noses glued to their phones. Even in Singapore, where the app hasn’t been released yet, the buzz is palpable. More than two weeks have gone by since the game’s launch, and my news feed is still inundated with memes and statuses about the collectible creatures.

It’s safe to say that Pokémon Go is an incredibly viral success. Within a week it had overtaken Tinder in total downloads, and it surpassed Twitter in daily active users shortly afterwards. Pretty impressive if you ask us. 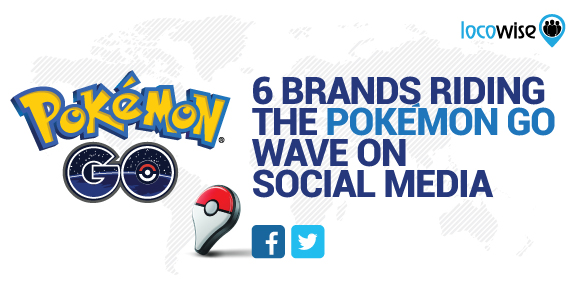 When a phenomenon of this scale takes place, marketers and brands are never far behind. Its augmented reality format means scores of people have hit the streets to go exploring, giving brick and mortars the potential to draw in tons of foot traffic. One New York pizzeria saw sales jump by 75% after spending $10 in the game to attract Pokémon to their store. Yelp has even created a filter for businesses lucky enough to be selected as ‘Pokestops’. Soon, the creators of the app will start charging for the opportunity to become specially featured ‘Sponsored Locations’ in the game.

Brands have also taken to social media in order to get their piece of the Pokémon Go pie, which makes sense considering how much of the game’s hype is playing out on platforms like Facebook and Twitter as people share their experiences. Naturally, some were more successful than others. Let’s take a look at how some brands have tried to capitalize on the trend and snag some extra exposure.

Texas-based fast food chain Whataburger put their own spin on things by imagining their own product as a desirable Pokémon worthy of catching.

The post was incredibly successful, drawing in more than 60,000 reactions, being shared over 12,000 times, and receiving a month-high engagement rate of 3.51%.

Notably, Whataburger went one step further by responding to a very complimentary top comment with another well-received bit of humor. That response received 637 likes of its own. Well played, Whataburger.

It’s always a good idea to respond to comments – especially the positive ones. Making your customers part of the conversation makes your brand that much more relatable.

On Twitter, the cinnamon roll chain jumped at the chance to engage their fans and offered to retweet any pictures of Pokémon that were caught at their stores. As an idea, this was a great opportunity to put their followers front and centre. Being acknowledged by a brand that you like is a gratifying experience, and seeing other people’s photos featured can only make you want to participate as well.

Unfortunately, it doesn’t appear to have made much of an impact. This may well be because they posted this offer as a response to another Tweet, which means it never actually showed up on their main Twitter feed. They did attempt to salvage the situation by retweeting it the next day, but the clumsy execution may ultimately have cost them the engagement they were looking for. That said, I can’t fault them for the idea.

@Cinnabon If you've caught a #Pokemon at one of our bakeries, tweet us the pic and we'll retweet it! #PokemonGO

This NBA team did a great job of referencing the recent trend with an amusing animated GIF. The copy to go along with the image was also quite well executed, with plenty of attitude befitting a sports team.

Interestingly, what makes this different is that it references and takes advantage of the virality of Pokémon Go without directly pandering to its fans.

The copy, for example, literally tells you to “catch ‘em somewhere else”. This probably helped them receive engagement from the segment of their fanbase who didn’t understand the trend and were less than thrilled with the game’s sudden popularity.

The post was retweeted almost a thousand times and has topped 1,200 likes – significantly better performance than their average.

This local producer of – you guessed it – Australian bananas took a clever approach by incorporating the ape-like Pokémon ‘Mankey’ into a picture of their bananas. Nothing about this felt forced. Unlike a lot of other attempts by over-eager brands to jam something Pokémon-related into their content, the joke made perfect sense.

Remember, it’s all well and good to create content around the latest fad, but if the connection isn’t natural then it may end up looking desperate.

Like Whataburger, the Australian Bananas social media team took the time to respond to comments but raised the bar by responding to DOZENS of them. That’s dedication. The commitment to interacting with fans really humanized the brand, and it shows in the encouraging responses from their fans.

This is the kind of engagement we should all be aiming for.

The Cincinnati Zoo took to Twitter to advertise their free Wi-Fi while also showing off the plentiful Pokémon just waiting to be caught in their park. The post makes a lot of sense thematically. After all, walking around and exploring new and intriguing animals is at the heart of Pokémon Go and that’s exactly what any zoo wants you to do.

In the end, it attracted a respectable 48 retweets and 187 likes. Let’s just hope any Pokémon playing visitors at the zoo took some time to take in the scenery – it does seem a little strange for people to be plastered to their phones looking for digital creatures in a zoo filled with the real thing!

Remember to watch where you're walking while you catch 'em all! #PokemonGo is better with #ZooFreeWiFi! pic.twitter.com/1vEiPzCMGd

In their effort to capitalize on the Pokémon trend, Samsung Australia decided to run a simple like/retweet poll asking their fans about their preferred Pokémon. We always encourage brands to try to engage their fans directly, but the post didn’t attract a huge amount of attention. In fact, it only pulled in 9 retweets and 28 likes.

There are a few possible reasons for this. To begin with, the picture could have been more eye-catching and interesting. It’s actually quite difficult to tell that it’s Pokémon-related at first glance.

For a company that makes phones that you can actually play the game on, there was definitely potential for a more imaginative image.

Secondly, while a like/retweet poll almost begs for engagement, a better option in this case may have been to go with Twitter’s native poll feature. Since you don’t need to like or repost the tweet to your feed in order to cast a vote, there’s a lower barrier to participation. It might be a subtle difference, but the native polls have in some cases proven to be extremely effective at getting people to chime in.

RT if you prefer Pikachu.

The meteoric rise of Pokémon Go gives us a great opportunity to look at how different brands respond to such a viral sensation and to learn from both their successes and their shortcomings. Hopefully, they are lessons you can apply the next time something explodes into the public eye. For now, it may be worth looking into how you can tap into the existing Pokémon Go phenomenon while it’s still a hot topic.

Now about that Singapore release date…

Want to make every piece of content count? Use Locowise and find out your best time to post and optimal post frequency to easily boost your engagement. Sign up for a free trial today.