Instagram’s 2017 Year In Review: What Marketers Need To Know

Hello to everyone, and we hope you’re having an awesome 2018 so far. In this post, we’re going to take our regular look at Instagram and the numbers behind it.

The insights we gather every month are the best way to show you how to make your client’s Instagram accounts even more successful.

So take a look, and see what’s going on with Instagram, and what it means for your clients and their accounts. 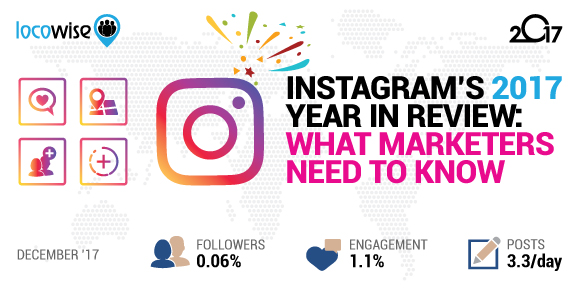 Growth And Engagement In December

Maybe it’s the fact that so many of us were rushing around trying to get gifts for family and friends, but December 2017 saw a drop in Instagram follower growth. Instagram profiles in our study grew by 0.06%.

This simply tells us that the number of new followers was lower than it was in November 2017, where the growth was at 0.07%. Instagram is set to grow even more in 2018 so we’re hoping to see the organic growth of profiles pick up as well.

Almost exactly the same as November, brands were posting content on Instagram around 3 times per day (3.32 times, to be exact). Again, images were by far the most popular posts, with 80.52% of posts being photos.

The good news? While follower growth dropped, engagement rose slightly. Post engagement rate was at 1.1%, up from 0.09% in November.

Post formats and their engagement rates showed us that photo posts enjoyed 1.2% engagement and video posts engaged 0.8%. Both were increases on November 2017 which held 1% and 0.7% respectively.

Instagram rolled out a feature in December 2017 that has caused perhaps equal amounts of celebration and concern. Live Requests (where someone can ask to join your live video) are now possible.

This works for brands because they can field requests to join a live broadcast, like a question and answer session, for example. We can see huge benefits here, especially if you have someone join who has any kind of influence. And the social proof involved in having an advocate join your live video is incredible.

The ‘concern’ part is all down to the fact that literally anyone can join your live video, or at least ask to join. This is where it may need a few wrinkles ironed out, especially on private accounts. The thought of an absolute stranger joining someone’s private live video isn’t appealing to a number of people right now.

As regards branding, it’s basically the same (in a way) as a podcast or radio show (or indeed TV broadcast), and if you allow the right people in, we can see some real magic happening.

Another update that hit Instagram on IOS and Android in December was the ability to send a Live Video in Direct.

When a user is live, if they tap the Direct button at the bottom of the screen they can send the live video to their friends. The friends will receive the live video in their direct message inbox.

Obviously, this can only happen when the user is actually live, but it adds that extra bit of functionality, and we can see uses for brands (if they’re not besieged by millions of strangers requests to join, that is).

Currently on-test, ‘Recommended For You’ is a feature that shows you posts that your friends have liked. It also has an algorithm that chooses content you may be interested in.

This isn’t entirely new and Instagram has shown you posts that people, you follow are interested in, for example. But this, if approved, goes directly into your feed.

Hairgate, and the heat is on for influencers in December

An Instagram user noticed that there was a particularly clever (or devious, depending on how you look at it) marketing trick via a brand called Kaiwei Ni. The sneaker brand chose to have a line running through the screen when a user found it, and the line made it appear as if there was a hair on the phone screen.

Instagram removed the ad when it was discovered, and the brand was not allowed to advertise again. But it made for an intriguing talking point. Was it sneaky (sorry) advertising, or simply genius work? Check this out and see what you think.

Stars like Naomi Campbell were picked out (and picked on) by the FTC, with a report from the WSJ highlighting how some Influencers are not playing fair on Instagram. Naomi, as well as over 20 other Influencers, were sent warning letters by the FTC.

It’s to be expected, with influencer marketing now very much a popular and busy industry. However, most influencers are crystal clear on declaring interests with brands.

The FTC has said that influencers can use hashtags to show they have a commercial relationship with brands, with the most common one being #ad. The pressure seems to be increasing for these influencers, and the brands that court their sponsorship.

Influencer agencies and talent coordinators are addressing the issue, with tighter contracts for influencers and more transparency over the nature of arrangements. With the big issue being compliance, we think that influencer marketing will be a safer space for brands to work in 2018.

Check out our report next month to catch up with the latest Instagram insights and news.

Like the way we talk about Instagram? That’s because we work hard to find all the data our clients need on the platform. If you’d like to be part of this, try Locowise free for a week.