Brands on Social who Pushed the Women’s World Cup

The FIFA Women’s World Cup attracted a lot of attention.

This is a pleasing and long-overdue development, but it also has some connected news that makes it even more exciting. And the excitement comes for brands who have developed a strategy around the event.

We thought we would take a look at a few of these brands. 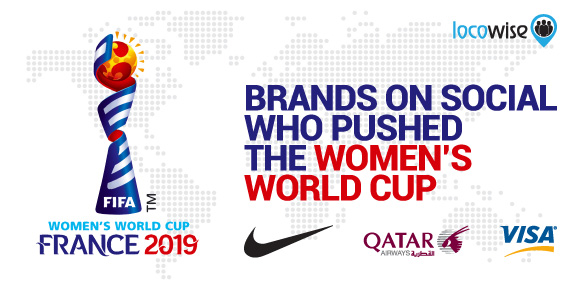 This brand is perhaps one of the biggest in the world, and definitely the biggest in sport. So, it seemed perfectly natural to build a campaign around the Women’s World Cup. Nike released a video, something they have done many times before for men’s football.

The video is as inspirational and exciting as anything Nike has produced before. When it surfaced on Twitter, it completely blew up. It works in many different ways, but it definitely taps into the inspiration that women’s football brings for young girls everywhere.

The video is called ‘Dream Further’, and it follows the journey a 10-year-old girl makes towards becoming a footballer. It’s beautifully shot and carries the trademark message that Nike offers. The tagline is ‘Don’t change your dream, change your world’.

On the day it was posted on Twitter, it received millions of views. Nike has always discussed dreams and pointed to changing the game in sport. It’s just what Nike does. And the World Cup for women fitted into that neatly. It’s an emotionally charged event, and Nike delivered the good there.

This airline brand is a legitimate partner to FIFA and it weighed in with one of the most attractive and inventive videos we’ve ever seen. It’s a little strange, but it speaks to fans and the dreams they have. Just like Nike, the brand has picked up on the idea of dreams as the main tool to make a connection with the audience.

It is a strange video, including imagery of 50-foot footballers for one thing, but it works. It’s an amazing video, with striking imagery, all tied up with the message that the dreams you have can change everything.

Another official FIFA partner and it has a big vision for its work with the association. The imagery in the video is powerful.

Altogether, it’s inspirational and it resonates with the emotions the brand is trying to draw out of our experience of women’s football.

What’s great about it is that it has a universal message, this was shown with a dual-language version of the video, which had a double impact on English social media and Colombian social.

So what’s it all about?

All of these video campaigns are about aspiration and raising awareness of Women’s football in general. They were all shot and focused on the core message that was in need of expression. In other words, the brands jumped on the back of a major sporting event and made it mean something with core messages that resonated with fans.

If anything, there is a lesson here for all brands about how to make a campaign have more weight. The women’s football arena has plenty of issues inside of it, but these brands focused on the positives, and on making these players and the very idea of women’s football exciting, empowering and fun.

Would you like to get your hands on some of the best metrics in social media? Course you would. Come see us and we’ll give you a free week.