Widening The Content Sphere: How 2 Brands Are Taking Left Turns In Their Social Media - Locowise Blog

Widening The Content Sphere: How 2 Brands Are Taking Left Turns In Their Social Media

There is a pretty good chance that your clients exist as part of a saturated market. The nature of the business is such that if someone is doing it and being successful, someone else will follow.

Social media content is the main medium of delivery here. Being unique online requires a mindset that throws out the expected and the norm your client’s industry is part of. 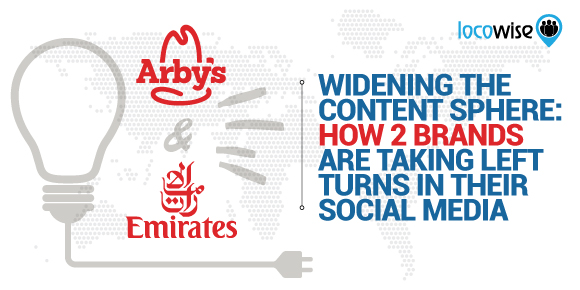 This is a fast food chain and it generally sells sandwiches. But the social media content it comes out with isn’t always about the sandwiches. In fact, the brand makes a conscious effort to remove itself from the main topic it should be talking about.

Their social media content is aimed at being funny. But they also work hard to be part of the cultural zeitgeist too. So you’ll find plenty of pop culture references that allow them to get in sync with the people they sell to. The more you look at their content, the further away they get from sandwiches.

It’s not just funny. A lot of the stuff that Arby’s stick on their social media is cultural, and it neatly links in with the slightly pointless conversations you have when you visit a restaurant. People do have inane conversations while eating out, and that whole vibe comes across in the social media that Arby’s delivers.

Take a look at this one here. There is absolutely nothing here that makes much sense, but you can imagine saying the exact same thing (but probably in a less funny way) if you head down to the restaurant for a snack. The brand is not selling here, it is just simply trying to be weird and cheerful. And that has gained Arby’s a lot of love online.

Their top Facebook post in May 2017 gained an engagement rate of 2.81%. That’s pretty healthy. For the same period, the average reach was 982,991. That’s a fantastic level of reach for a brand, and the content the brand is delivering is (for the majority of the time) nothing to do with sandwiches.

And according to the Locowise benchmarking report that we ran on the brand, the engagement in the month of May was 367,252. That’s a ton of engagement over the month.

Remember, Arby’s are not selling what they produce. Instead, they are casting their net wider and creating content that is all about the lifestyle and perhaps even the worldview of its customers.

A pig that doesn't fly is just a pig pic.twitter.com/mKEC9DlYSC

This is where things get really ‘wide’. Emirates is an airline that isn’t necessarily the first name that comes to mind when you think about Americana or any other aspect of American culture. But their video with Jennifer Aniston managed to tick a lot of boxes for great content, delivered to the right audience.

Emirates is not a US airline, but it does have a first class section with ticket prices over $21K. Yes, we know, that is a lot of money. But if you ever had the chance to look at the first class experience on Emirates, the price tag would not seem that extravagant.

And that’s what the brand did with Aniston. It created a story feel to an ad, and basically had Aniston walking around the first class experience, and even stopping to enjoy the ‘standard’ experience on the plane. All of this actually works in a different way than you would expect from an airline.

Think about the big airline ads and campaigns of the last ten years or so (or even the last twenty years). They are all about pushing the features that customers get, such as good seats, good service and so on. This has become stale.

Emirates don’t focus on the plane itself, it’s there in the background. The human story behind the ad, with Aniston playing herself, shows how all parts of the Emirates experience hold massive benefits for customers. It’s real, and it looks like a great way to fly.

Friends was an absolutely huge TV show, and Aniston is one of the few stars of the show that have enjoyed a successful post-Friends career. This has meant she has become known as a TV icon, and someone millions of Americans identify with. The end result here is an ad that takes away the ‘difference’ that Emirates has in the US, and replaces it with an American feel.

The ad shows us the plane, allows us to experience it. This means that Emirates are not talking about planes anymore, and they’re not talking prices. They are just showing us what it feels like to fly on one of those huge airliners.

Like Arby’s, Emirates is taking its marketing in a different direction. It is ‘off topic’ with the campaign, and finding a cultural, customer-based thread to follow.

So what can brands learn here? It’s important to sell, of course, otherwise you may as well not be in business. But taking that left turn and showing the audience something that seems unconnected to the product (at least at first) means that you have a wider set of marketing tools.

Brands don’t have to stick to the tried and tested messages. Any brand can do what these two have done. It just requires creativity, and an embedded understanding of what makes your audience tick.