What Brands Can Learn From The First Ever Twitter Awards

It was bound to happen. One of the most powerful social media platforms around has decided that it deserves its own glitzy awards event. Twitter has just delivered its first set of winners of the Twitter Awards.

These awards are centered around a few key aspects of what it takes to be successful and ground-breaking on the platform. In addition to that, the awards also highlight a few key features around good work on social media in general. We thought we would take a look at some of the winners of the awards and see if any lessons can be learnt for brands.

If you are struggling to gain traction on the platform, seeing what these brands are doing may help. And by the way, it’s not all about the big budgets and the huge creative teams (although some of these winning campaigns clearly benefit from that kind of stuff). 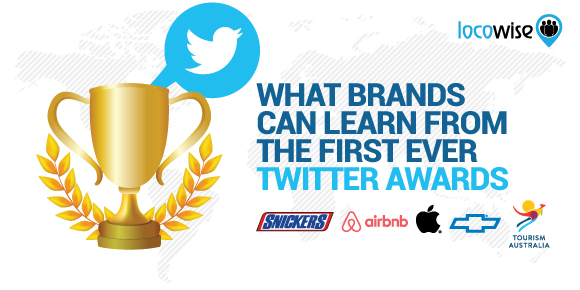 Instead, and as with all social media, being different and disruptive can go a long way when it comes to getting results. By the way, it’s important to know that Twitter has made it very clear that the awards are there to recognise ‘original and creative advertising’. So budgets are, obviously, involved in much of what follows.

Okay, the company may have had its fair share of controversy over the last year, but Airbnb has also been working hard on its social, and picked up something of a coup with the #LiveInTheMovies campaign.

It is widely recognised that Airbnb managed to grab a ton of reach and engagement around this particular campaign, and it was certainly successful. Twitter gave it a Gold Creativity Award as part of the first annual celebration.

The whole campaign was centered around the audience choosing which movie they would live in. This tied in neatly with the timing of the Academy Awards, which just happened to be running at around the same moment.

Airbnb also tied in the fact that they organise living spaces for people, with the movies, and escapism. People generally choose Airbnb (outside of cost benefits) because it allows for a little bit of mystery and excitement. This campaign fed into that perfectly.

When you go to Nepal seeking the mystic secrets of the Himalayas, the journey can get a little…strange. #DoctorStrange#LiveInTheMovies pic.twitter.com/74bR4RaLgn

Get the timing right, and think about what your brand creates for the audience. Then make it fun and easily accessible (animation works a treat here).

Even we are a little in awe of this one. Here is a brand that has spent years being pretty cool anyway, and then it pulls off this work on Twitter.

Snickers has developed a great little theme around people being ‘different’ when they’re hungry. Different in this case basically means hungry and angry, and Snickers steps in to save the day. But this particular campaign, while incredibly creative (and possibly even more so than the Airbnb one) also had a huge impact, which is why it won the Gold Impact Award.

Forget the famous algorithm created by Google and Facebook, Snickers had its own ‘Hungerithim’. This (which we suspect is not like a real thing) measured the sentiment and the bad vibes on the Internet and made Snickers bars cheaper the angrier the Internet got.

The result? Nearly 30 million impressions during the five week campaign. That is impact.

Take your brand’s big idea and turn it sideways. We’re prepared to believe there is a Hungerithim. But even if there isn’t, this stuff works.

A huge company like Apple has its problems too, and believe it or not, customer service (was) one of them. That is until Apple decided that using Twitter to help them make their customer service even better was a good idea.

Apple soon found itself in a position where it could pick up any conversation at pretty much any time. This meant that response times were quicker. It also meant that it could use all sorts of fancy media when it responded.

Too many emails? Unsubscribing just got easier in iOS 10. pic.twitter.com/A7zr55nKzf

The above examples were gold medal winners, but in amongst all of that the second and third place winners were pretty amazing too. Of course, the whole thing was set up to highlight outstanding usage of the platform itself, but a couple of examples here really shone through, even though they didn’t take the top spot in their category.

The car maker went completely off topic with this one and decided to get a little quirky. Picking out famous people who are known for supporting causes and helping others, such as Kevin Spacey, Chevrolet worked out that it was a leap year, and created a campaign around it.

The Leap Day phenomena was picked up by Chevrolet as a day to ‘do some good for someone else’. Tons of events and special giveaways ensued, but perhaps the very best part of the whole thing (called #dayitforward) was how Chevrolet grew engagement by asking customers to shoot videos of their own random acts of kindness. The result was incredible with 872 million impressions recorded.

This one is just simply a cool example of Periscope being used as it should be. Take a small ball, stuff a phone inside it armed with the Periscope app, and use it to film people around Melbourne, basically talking about how great Melbourne is. A coup for the Tourism Victoria people, and (at last) a truly useful expedition for Periscope.

The above are all winners, but each one showed how Twitter could be turned to a brand’s advantage. Whether it’s cute videos or slightly scary algorithms, Twitter’s speed and almost universal popularity make for great branding opportunities.

Turn the rules upside down and have fun like these guys did. Who knows, next year, your brand could be winning at the Twitter Awards.

Fancy getting your hands on some metrics that really make a difference? Try a cool 14-day test run of Locowise. Cool metrics that give you the competitive edge.