UK Elections In Social Media: What Can Marketers Learn?

UK Elections In Social Media: What Can Marketers Learn?

Tweet
Share
Share
With the upcoming election in the UK being billed as “the first truly social election” we wanted to take a look at how the parties and party leaders use Facebook and what results they are achieving. All this in order to figure out what community managers and social media marketers can learn from Britain’s biggest political parties. We looked at one month of data since the campaigning started at the end of March.

It is not totally clear yet but according to media reports parties vary in terms of how much money they spend on social media marketing. For example the Conservatives are spending over £100,000 ($154,000) each month on Facebook ads. This is why we will try to highlight metrics that show the organic value that they create through their content, messages and community engagement. 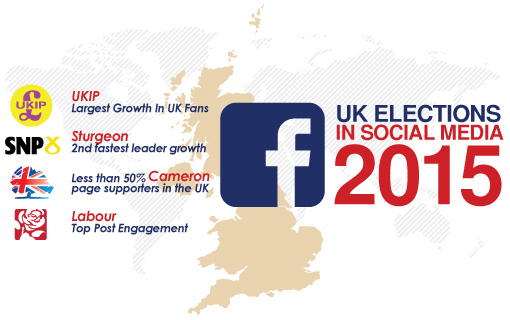 Facebook page size:
Less than half of David Cameron’s page likes are from the UK
Conservatives lead the Facebook race with 436,000 total page likes (20% increase in the period we looked at), which may be due to their ad spend. Second largest page is the UK Independence Party (UKIP) with 427,000 likes (24% increase) and next up is The Labour Party with 271,000 likes (23% increase). If we actually look at the number of page likes from the UK UKIP leads with 359,000 likes, the Conservatives are next with 343,000 likes and Labour in third with 207,000 likes from the UK.

Total number of new likes to all the party leaders in this period was just over 205,000. Of these new likes 47% went to Nigel Farage. Second most popular was David Cameron with 21%, Ed Miliband was third with 12%, Nicola Sturgeon next up with 10%. Natalie Bennett got 6%, Leanne Wood got 4% and Nick Clegg got 1%.

Combining these numbers we see that 38% of all new “political” likes in the period went to either UKIP’s page or the page of Nigel Farage. The Conservatives and David Cameron are second best with 24% of all likes. Labour and Ed Milliband are third with 16% of all likes. The Green Party with Natalie Bennett got 11% of all likes. The SNP and Nicola Sturgeon got 7% of all likes and Plaid Cymru and the Lib Dems each got 2% of all likes.

Posting activity:
Lib Dems are not so social
Labour are most active by far posting more than 470 messages. Second most active is Plaid Cymru with over 270 posts. Next up are Conservatives with 194 posts. The other parties are in the range of 150 to 189. The least active by far are Liberal Democrats with only 55 posts. Posting less frequently could actually result in a higher organic reach and engagement per post according to our recent study, but the Lib Dems just seem less active on social media than other parties are.

For party leaders Natalie Bennett is the most active with 213 posts, Leanne Wood is second with 135 posts and David Cameron third with 126 posts. Nick Clegg has only posted 31 times and Nicola Sturgeon only 40 times.

Party leaders’ personal Facebook pages in general have higher engagement than official party pages, which makes sense with the personal nature of social media. Leading is Leanne Wood with a 21% engagement rate. Second up, Natalie Bennett with a 14% engagement rate. Third up, Nigel Farage with 11.5%. Last on the list is Nick Clegg with only a 0.7% engagement rate on the 31 posts that he has published.

Viral buzz:
David Cameron and Nigel Farage have 75% of all shares between them
Facebook shares have a higher viral impact than post likes and comments. Getting their supporters to share the messages is one of the main ways parties can generate buzz organically on Facebook.

Interestingly enough the most engaging posts for three of the parties were the posts where they “attacked” another party. Labour achieved a 9% engagement rate by posting a video about George Osborne, the most engaged post for the Conservatives was the “Don’t let them forget” photo post (in which they also include the call-to-action to “hit SHARE”) which got 4.5% engagement rate and Lib Dems post “We won’t allow” photo post got 1.5% engagement rate. The “hit share” call to action actually resulted in more than 50% of interactions on that post being a share rather than a like or any other interaction.

The most engaging post by a party leader was this photo posted by Leanne Wood. Even without any copy, the photo was strong enough for a 54.1% engagement rate. The second most engaged post was the “let’s keep working hard to make Scotland’s voice heard” status update from Nicola Sturgeon with 23.4% engagement rate.

David Cameron had the most shared post with the “importance of Christianity” video, which was shared almost 25,000 times. That video alone had more shares than the top posts of each political leader combined.

Most used post formats:
Photo-ops rule
Looking at the post format that the parties use, photos are the most popular with 48.6% of all posts. Videos are up next with 22.6% of overall posts. Links stand for 24.8% and status updates are by far the least popular format with only 4%. Interestingly enough Labour were responsible for 86% of all the status updates posted.

For party leaders the numbers are very similar with a focus on photos. One curiosity is Natalie Bennett who prefers links with 89.3% of her content being link posts.

Focusing on multimedia makes sense as both videos and photos have the highest engagement according to our March study. This means there is an argument that parties should increase their video output due to Facebook putting so much focus on it and the engaging and personal nature of the format.

What can community managers learn from this?
Personalities get more engagement than brands.
How can you use a personality such as a celebrity, an employee of the company or a user of your product to tell your story in a more engaging way?
Be timely.
Use events and happenings that people care about to gain attention for your message. UKIP celebrated St. George’s Day and promised a new holiday which got 15.6% engagement. David Cameron wished a Happy Easter and spoke about Christianity to get 25,000 shares.
Ask people to share.
This tactic may have been overused by marketers in the past but in some specific occasions it doesn’t hurt to ask your followers to help spread the message for you.
Be visual.
The most engaging content from all the parties were photos and videos. In some cases a photo, even without any words, resonates with an audience and gets people to react.
Try different things.
For example, with an “election song” the Green Party got their message across and a 11.4% engagement rate. How can you do things differently?
And what about predicting who’s actually going to win the election? Well, if you work from these numbers, then UKIP and Nigel Farage are likely to be celebrating on the 7th May. However, like anything in politics, it is never that simple.