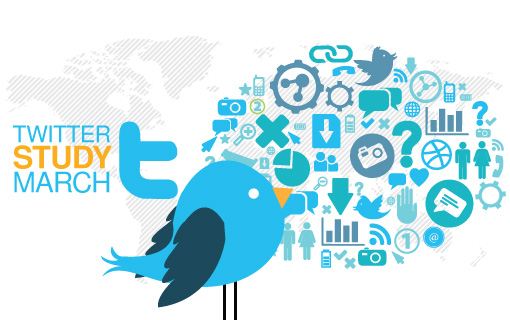 High activity
with brands sending 8 tweets per day
On average the profiles sent 8 tweets per day. This is much more frequent than the one post per day that brands publish on Instagram, or the 2-4 times per week which was the average posting frequency in our Facebook study.

As we discussed in our Facebook posting frequency study, Twitter does seem to be the platform where brands post without censoring their output too much. Everything gets posted on Twitter, while in general brands are more cautious with the amount of content they publish on Facebook. This amount of “noise” could make it more difficult to reach your audience and get them to engage with your content, which leads us to interaction numbers.

0.2% of followers
interact on average with a tweet
First of all we only include retweets, replies and favourites in our interaction numbers (clicks are not included in this).

0.2% of the total followers interacted with a tweet on average. This was 0.08% for pages with over 100,000 followers. These numbers are lower than what we see on Instagram for example, where over 2% of followers engage with a post.

52.27% of all interactions were retweets, 39.46% were favourites and 8.27% were replies. Just like we’ve seen on the other platforms, people prefer clicking on a like button or on a retweet or favourite button rather than actually writing a reply or a comment.

Combined, the profiles we looked at were mentioned more than five million times in the month of March. On average each profile got 5.38% of their followers to mention them during the month. For profiles with over 100,000 followers this number was 2.59%.

Brands are not that social:
1 out of 15 followers can expect a retweet or a reply
Despite the social nature of social media, the profiles we looked at were not that social. Combined, the profiles replied just over 270,000 times and retweeted just over 180,000 times. This means that a brand interacted by either retweeting or replying to only one out of every 15 mentions or replies that they got from their followers.

We found similar, low engagement in our Champion League football study earlier. The real-time and personal nature of Twitter and other social media could be used to establish closer relationships with customers and build better customer support experience. However, most brands do not seem to be exploring this opportunity currently.

What can community managers learn from this?
You can actually grow organically on Twitter compared to Facebook.
As previously referenced, it is very difficult to get the growth on Facebook without spending money on ads.
Don’t be afraid to tweet more frequently.
Don’t censor your output on Twitter. You are only getting a small percentage of your audience to interact with a single tweet. By tweeting more frequently at different times of the day you could reach and engage more of your total followers.
How can you be more social.
Most brands don’t interact with their followers on a one-to-one level. How can you do it differently? Should you have someone on standby to answer any question you might receive? Could you open Twitter to customer support queries? Should you simply thank people for mentioning you or sharing your content?