Welcome to our monthly Instagram growth and engagement study for the month of May.

We look at 2,500 Instagram profiles and their performance on the platform.

We also look at the latest product improvements and other news too.

All this to help you identify the trends and standards on the platform, and to make it easier to compare your own results.

Would you like to dig deeper into these 2,500 Instagram profiles and make an even more detailed comparison with your own profiles? Get a free Locowise trial now.

May growth and engagement

Follower growth in May was at 0.09% of the total audience. This is an 18% decrease compared to April and it’s the lowest follower growth we’ve seen while doing our studies.

Post engagement rate was at 1% of the total audience with 99.1% of all interactions being likes. This is a 9% decrease in engagement compared to the months of March and April.

Profiles posted 3 times per day on average in May with 86% of all posts being images.

It’s a right decision to focus on images. Images engaged 1% of the total audience while videos only engaged 0.7%. You stand to gain 43% more engagement by posting images rather than videos on Instagram. 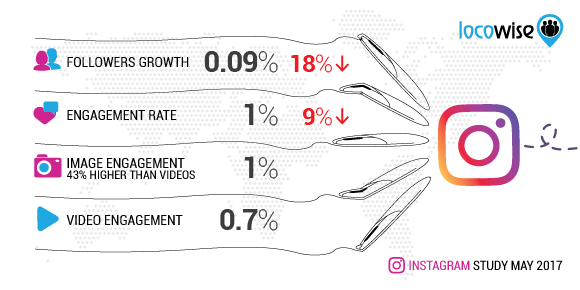 We’ve spent a lot of time recently discussing Instagram influencers and how brands can use them to get access to a larger and more engaged audience.

One of these influencers has published a viral blog post during the month revealing some of the techniques influencers use to get and hold onto their influence.

Brands partner with influencers in order to reach more people and to get them to engage with the brand. They use the very basic metrics to measure the results such as number of followers gained or numbers of total engagements while influencers use “the tricks and shenanigans” to play the system and inflate these very same numbers.

Some tactics influencers use are:

The whole post is a very interesting look into the world of Instagram influencers. Do take a look.

Is Instagram the worst social network for the mental health of its users?

Instagram may have been winning many battles over the last few months, but it may also be the most negative network for the mental health of its users. That’s exactly what this recent report concluded.

“The findings weren’t all bad. Nearly 70% of respondents reported that they received emotional support on social media when times were tough, and many said their accounts offered a forum for positive self-expression. They were also able to create and maintain relationships online. The problems centered more on forgetting that what we see isn’t always reality, and the RSPH offered some recommendations based on its findings. For one, fashion brands, celebrities, and others should consider disclosing when their photos have been manipulated. It also suggested that social networks give users a pop-up warning if they exceed a certain time spent logged on.”

Snapchat cloning has been completed

The Snapchat cloning project has been completed during the month of May with the addition of face filters. This was the last big feature that Snapchat had that differentiated it from Instagram. This is the initial set of face filters:

Instagram also added location and hashtag-themed stories. These will show on top of search results for locations and hashtags and also on top of the personalised “Explore” tab.

The difference from Snapchat’s “Our Story” is that Instagram is using an algorithm to curate the themed content rather than human editors that Snapchat uses.

Don’t call all these efforts a copycat though, says Kevin Systrom.

Being ranked in the “Explore” tab has the potential to open up your content (and your brand) to a large number of people interested in what you are doing.

One of the first things people see in the new Explore tab are the best stories from the location where they are right now.

The more you post, the more you hashtag and location tag and the more you engage your audience, the higher the chance that you will get highlighted in the Explore tab and expand your reach.

Direct messaging now supports external links and the ability to send pictures and videos without the need for cropping. The web links will feature inline previews.

375 million people use Direct monthly and this latest update makes it even more appealing to use.

One interesting new advertising option is that you can start Facebook messenger conversation directly from your Instagram advertising.

It’s an exciting option for businesses with chat bots and other brands that want to get in a direct dialogue with their audience.