The six-year-old virtual scrapbook is one of the world’s most valuable startups and it seems to be quietly growing and evolving.

Last year, the company rolled out its biggest ever engineering and design overhaul. This year, Pinterest announced major improvements in its search algorithm.

A third of US internet users now use the platform. But does any of this matter to you? 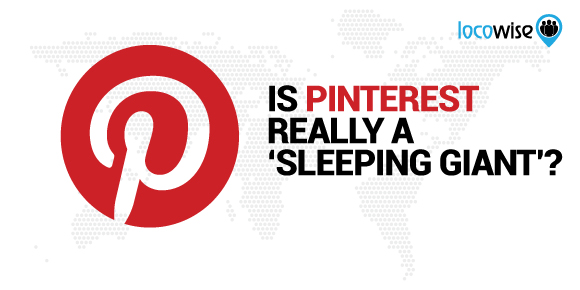 The best place to get a quick overview of a platform? The stats. These are nothing on Facebook’s numbers, but they’re pretty impressive considering how underrated Pinterest tends to be. 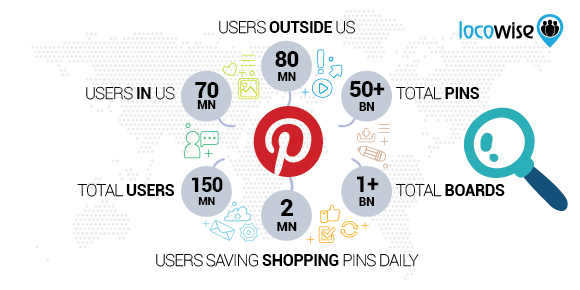 Pinterest was founded in August 2010 by CEO Ben Silbermann. He has defined Pinterest as a ‘catalogue of ideas’ rather than a social network, created to inspire users to ‘go out and do that thing’. He believed that people shop with their eyes and that Pinterest would allow users to collect things like recipes, decor ideas, and fashion tips — inspiring them to ‘do’(ultimately, to shop).

Investors agreed with Silbermann, and at last count Pinterest had raised a total of $1.3 billion. Its investors include Silicon Valley VCs Andreessen Horowitz and Bessemer Ventures. The brand is now in the top 10 of Fortune’ Unicorn List (private companies valued at $1 billion or more). Interestingly, fellow possible sleeping giant Snapchat is also on that list.

Pinterest was valued at $1.5 billion in May 2012. In 2014 it moved away from a freemium model and started looking at offering promoted Pins similar to paid posts on Facebook. By 2015, when it added its ‘Buy’ button to its mobile app, it was believed to be worth $11 billion and to have made $100 million in advertising.

The year 2016 finally saw Pinterest ‘tip’. That is, it now had – and has – more users outside than inside the US, with the total number of users doubling from 2015-2016. The platform is growing fastest in the UK, France, Germany, Japan, and Brazil.

In the same year its focus on mobile users intensified. They rebuilt the initial Pinterest app designed for iOS to be sleeker, more versatile, and faster. This makes sense, as around 80 percent of people access the site via smartphones.

The approach to the new design was very minimalist – plain enough, Silbermann hoped, that the same page design would appeal to British men as it would to Japanese women, and not distracting from the images (and pins) that are the focus. Silbermann said at the time of the roll-out that Pinterest is only as good as the diversity of ideas in it.

Plus Points For Deep Learning

Silmbermann’s engineers didn’t stop with an app re-engineer. This year what some call the ‘world’s biggest visual search engine’ has announced major improvements to its algorithm. Pinterest’s new search system, called Pin2Vec, uses deep learning across the entire Pinterest network to look at not only related content, but also what people most commonly look at after their first Pin. It’s clever stuff, really.

‘One of the most popular ways people find ideas on Pinterest is through Related Pins, an item-to-item recommendations system that uses collaborative filtering. Previously, candidates were generated using board co-occurrence, signals from all the boards a Pin is saved to. Now, for the first time, we’re applying deep learning to make Related Pins even more relevant.’

Put incredibly simply, it’s going to be much easier to find exactly what you’re looking for on Pinterest – and refine your marketing – now. Pa goes into detail on Medium, and includes some images that help keep deep learning simple.

Retail companies have traditionally used Pinterest for ‘style trending’. Pinners interested in fashion might create their own ‘look book’ based on boards curated by a clothing brand, for example. Today, though, marketers are getting way more creative. Here are five examples of brands that are getting it right on Pinterest now:

High-end fashion brands can feel alienating. Nordstrom is very approachable on Pinterest, with images of ‘real people doing real things’. The amount of copy you can use on Pinterest is very limited, but they give their themed boards fun names that add to their appeal. Their boards aren’t limited to catalogue-style models wearing their clothing, either, making the content more engaging. ‘Shiny Things’ and ‘Well Said’ are worth a look for their clever copy and spot-on images that take the brand beyond clothing and into the lifestyle arena. The Seattle-based retailer has a huge 5.5 million followers.

2. WWF-UK ‘From Our Supporters’

When it comes to engagement, The World Wildlife Fund UK gets it right. Their ‘From Our Supporters’ board encourages their followers to submit artwork they’ve created. In their own words, via their profile: ‘Here at WWF-UK our supporters like to send us images that they have created or that they love – and we thought it would be great to share them with everyone :)’.

The highlight of the board is the letters and drawings sent into the WWF by children, featuring images of their favourite animals that the WWF is helping to conserve. The children’s drawings are visual and emotive, driving home the message that the wellbeing of the planet is in the hands of generations to come. At the same time, this content is very pinnable because of its cute factor – even if it wasn’t created by your own child. The board has 206,000 followers.

Etsy is known for doing ecommerce really well. They’ve also done Pinterest so well that they’re a case study on the platform’s webpage. 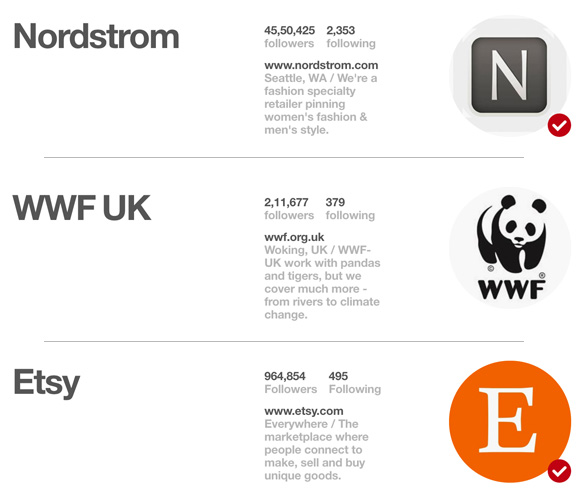 Rachel Ball of Elephantine is a seller on Etsy who uses the data she gathers from her contributor board on Etsy’s Pinterest account – saves and likes of her products – to know what styles of jewellery are getting the most traction from her audience. According to Pinterest, since she started using the platform to promote her shop her average views per week have increased by 22 percent. Sales per week have increased 20 percent.

She says: ‘My Pinterest account encapsulates the kind of lifestyle that pairs well with my jewelry. I don’t produce Lookbooks, as many other jewelry designers do, so in certain ways, my Pins are a lookbook for my brand.’.

The Pinterest rules of social media engagement are almost exactly the same as on they are on Facebook, Instagram, and Twitter. Each platform has its own quirks, though, so we’ve put these tips together for the beginner looking to give Pinterest marketing a go.

Figure out if it’s for you

If you’re selling hardware tools to a Korean market, this is not the platform for you. If you have an international presence, especially in the US, UK, Germany, and France, it might be. Remember that most (but not all) Pinterest users are women with smartphones. The men on Pinterest have very niche interests, so proceed with caution.

Pinterest is getting closer to exact matches on searches but it still isn’t exact. If you’re used to marketing with keywords, you might be expecting really close matches from very specific keywords. On this platform, always assume a broader match and do your keyword/phrase research on the Ads Manager with this in mind. Start with around 30 keywords and expand from there while they build data – which you can learn from. Make sure you remember to use this data alongside the data from your social media management tool so it doesn’t go to waste.

Because Pinterest’s new algorithm is still learning and improving as it does, visuals really matter here. When you’re planning visuals for Pinterest, think Instagram meets glossy magazine. The most successful Pinterest images don’t have the handcrafted look that has become synonymous with Instagram, but they’re never as over-designed as some Facebook posts. Pinterest images look ‘real’, but at the same time they’re almost always clearly professionally taken and edited. You’ll want your designers on board here. For inspiration, look to print: home and decor magazines, catalogues from clothing companies, fashion magazines, food and drink. That’s a great starting point.

Get a guest pinner

User-generated content is as successful on Pinterest as on other platforms – as long as it’s ‘real’ and speaks to your market. If you’re new to Pinterest, do some research to find out which of your existing influencers are active on the platform and have a good following. Get them involved in your campaigns and your traction will improve quickly with the support of your advertising.

Still wondering? A study by researchers Millward Brown found that 93 percent of people on Pinterest use it to plan to buy something or to actually buy it. The latest figures suggest that 64 percent of Pinterest users who buy based on Pins are in real world shops, but as Pinterest becomes more ecommerce-friendly this might change. Either way, brands win.