Here we are again with our look at the performance of Instagram as a branding tool, as well as our news highlights for March.

First up, we’ll crunch the numbers… 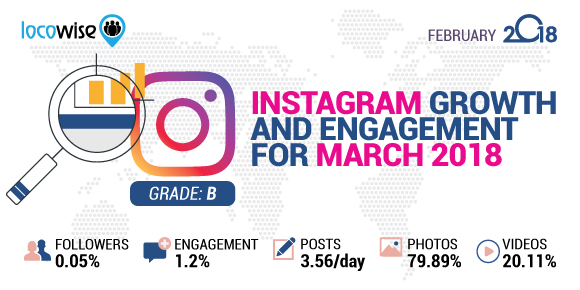 In total, March gave Instagram profiles a total follower growth of 0.05%, a drop against February’s 0.06%.

Brands posted on Instagram 3.56 times per day in the month of March, and back in February the figure was 3.39 times per day. That’s a clear increase in posting frequency.

Videos on the platform engaged 0.7% in March, not good news considering it was 0.8% in February. Photo engagement also suffered, with 1.00% in March. There was a better picture in February, with a 1.2% engagement rate.

It has been a relatively quiet March for Instagram. That’s not to say nothing has happened of course, and there are a couple of changes that should help to make Instagram an even more useful place for brands.

‘A new way to express your preferences’

Instagram has always been about expression, much like other social media channels, and it has just cranked up the versatility of the platform. In March it announced that users can now include hashtags and profile links in their bios. This means that your interests can be broadcast to anyone who sees your bio.

To understand the thinking behind this, we need to go back to December 2017, when Instagram announced that people could now follow hashtags. It was an easy thing to do (as simple as clicking on a hashtag and choosing to follow it) and it has become a feature that is genuinely useful.

Now this is an interesting one. In a nutshell, Instagram is going to release what is apparently its ‘most requested feature’. In other words, it’s going to roll out shoppable posts. Granted, the term ‘shoppable posts’ doesn’t sound particularly sexy, but it’s a major step forward for a number of brands who are already getting rather excited about it.

It’s not that new though. The idea of having shoppable posts has been around for a little while now. And it’s been a reality in the USA, albeit for a few brands, not just any brand. Warby Parker and J Crew were just two of the companies involved in what was essentially a trial run.

So what was missing prior to shoppable posts? The ability to include links in captions. This is basically the last piece of the retailer puzzle on Instagram. Having this option would make brands happy.

It should be the perfect marriage between content and advertising on Instagram. To be used effectively, brands will have to create content that generates engagement. If the posts a brand puts out there don’t have people interacting, shoppable posts will be a waste of time and energy.

For a brand to get the most out of the new concept, they have to create content that engages, and then they provide a link that makes it easy for engaged audiences to buy there and then in that same moment (almost).

However, brands will soon notice that there is another, even more lucrative level to all of this. If they have a stable of influencers, those influencers can do exactly the same thing. Therefore, with great content and the support of influencers, as well as a quicker route to purchase, brands that establish themselves powerfully with shoppable posts will see a real return on investment.

The feature is now in Australia, and has already proven to be powerful for brands there.

The Watch is old news

The Apple Watch is a stylish, fun accessory. It has even made people wear a watch for the first time in their lives. But Instagram doesn’t like it anymore, and has removed its app from it.

It isn’t the first one to take such a decision. Rather than updating the app as per usual, it will simply remove the app. Brands like Slack, Amazon and eBay have also taken their apps off the Watch.

Why is this happening? Much of the problem is connected to the size of the screen on the watch. It simply isn’t big enough or beautiful enough (display-wise) to show photos off in their full glory. That explains why eBay and Amazon ditched.

The lack of a camera probably didn’t help matters much either. Perhaps the final nail in the coffin is the need to develop stand-alone apps rather than use the tethering function with an iPhone. Generally, it was a very awkward relationship.

To top off the month, Instagram announced it was making some changes to how the feed displays to audiences. The main aspect of its algorithm (whereby stuff you’ve shown an interest in appears more often) will not change. However, there will be an option to ‘refresh’ the newsfeed so that new content appears more often, or at least if the option is used.

If the button (‘new posts’) is pressed the feed will be refreshed with new, but still relevant, content. If the button is left alone the news feed will stay the same. It’s an attempt by the brand to make the newsfeed more engaging and fun for audiences.

Instagram explained the change: “We’ve heard it can feel unexpected when your feed refreshes and automatically bumps you to the top. So today we’re testing a “New Posts” button that lets you choose when you want to refresh, rather than it happening automatically. Tap the button and you’ll be taken to new posts at the top of feed — don’t tap, and you’ll stay where you are. We hope this makes browsing Instagram much more enjoyable.”

Would you like to show your clients how amazing you are at using social media to market their brand? Take a look at Locowise with a free seven day trial. We know you’ll be amazed.