How To Create Unicorns For Your Social Media Channel - Locowise Blog

How To Create Unicorns For Your Social Media Channel

Starbucks is a busy brand. The feel and pace of a Starbucks coffee shop is pretty much replicated in the work it does online. And every now and then it pulls off the social media equivalent of a sugar rush.

The most recent example of a rush was the Unicorn Frappucino, a campaign and product that got just about everybody talking. It received tons of plaudits and accolades, as well as some incredibly vitriolic stuff from the haters.

We are going to take a look at how it worked, and what we can all learn from it. 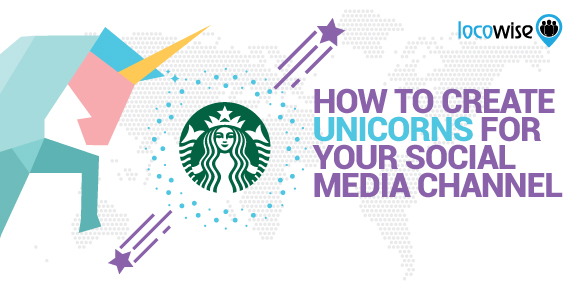 Well, the clue is pretty much there in the name of the campaign. When Starbucks wanted to bring out a new drink earlier this year, someone in the creative team decided that a unicorn drink was appropriate. And the good news (from Starbucks’ point of view at least) is that this idea coincided with a rather scary obsession with the mythical creatures, an obsession that hit all media channels and established itself in popular culture.

The drink was actually rather tasty, apparently, and it had a limited run that quickly ran out. So it was popular. Riding the crest of the cultural wave it was seen as a fun addition to Starbucks’ already impressive drinks menu.

The run for the drink was between April 19th to April 23rd. It sold out very quickly. It looked weird, and it didn’t always make people happy. But it was there, and no other drinks or food retailer latched onto the unicorn thing as effectively as this.

Why did it work?

Well, it was kind of cool, for starters. Unicorns are a big part of popular culture, and for a major brand to jump on the back of that with as much kitsch as it could was a big deal. On top of that, a number of factors also ensured that the simple fact of cultural relevance was not the only thing that helped it fly.

However, a key indicator of the joined-up strategy gameplan being super effective is the use of social media. Interestingly enough, the whole thing was famously leaked on Reddit before Starbucks could do anything about it. It was literally pushed out the gate before it was ready. Of course, the ‘leak’ could well have been pre-planned, but it’s a nice story anyway.

After the leak, workers in Starbucks shared photos before the marketing team got busy. That’s right, this was a product that the employees themselves were sharing pictures of before it went live. And that gave the whole thing a lot more urgency and excitement. Pretty cool really.

Okay, we know Starbucks leaked those photos on Reddit. It was all on purpose. And the leak allowed Starbucks fans to feel that they were sharing some hot news, so the pictures of the frappucino were promptly shared by people who love the brand. All good stuff.

If you don't believe in Unicorns, it's ok, cause the #unicornfrappuccino is coming to a #Starbucks near you. Launching 4/19-4/23!!!

Okay, the stock price of Starbucks actually rose significantly while the drink was available. This is an amazing aspect of the campaign. For a campaign that must have been ridiculously easy to set up (once the drink is created er… that’s it) it brought the stock price up by 1.8%. That’s an amazing level of impact.

On top of all of this, the unicorn thing may well have created an interesting effect for the brand’s reach. We mean real world reach at least because many Starbucks outlets reported that they were serving an entirely new set of customers. That’s different ages and different walks of life. And that can’t be a bad thing.

Instagram has always been a little weirder than all the other social media channels available.

There is a good reason for this and it is basically that images can be a lot more evocative and strange. And when the whole unicorn frappucino thing hit this particular channel, it decided not to go away. We are talking about a campaign that started months ago, remember. No one told Instagram users it was old, apparently.

Here is the post that kind of made the difference and started the whole thing off. We ran it through our own process (where we see how a post has done) and it came off incredibly well.

It’s from April 19th, which is just ten days after National Unicorn Day (seriously), and was therefore perfectly poised to jump in on some of that cultural magic. First up you’re looking at over 655,000 Likes. Not too shabby, and an indicator of the beauty of timing perhaps.

But then you’re looking at a 4.9% engagement rate and that’s huge. Nearly 38,000 comments is also an indicator of how the post leapt above and beyond what the other posts (at the time) were doing for Starbucks on Instagram. In fact, the post outperformed the vast majority of Starbucks’ Instagram content so far this year.

But guess what? Instagram still has plenty of Starbucks Unicorn stuff going on. You can’t buy the drink anymore, but you can still enjoy the good vibes.

As majestic as it is magenta… #UnicornFrappuccino. Color-changing, flavor-changing, potentially life-changing. #🦄 Available for a limited time at participating stores in the US, Canada & Mexico.

Easy. If something is happening in the cultural landscape, and your brand could use some of that feeling, work it.

Starbucks is in a great position because you can create (we think) a drink based on anything. But it took some savvy work on the part of the creatives to get to the point where they had a drink and an approach that would hit the right notes so perfectly.

You can pull off a sugar rush of your own. Bear in mind it takes the combination of an understanding of popular culture, and a product link that makes sense, as well as a strong understanding of the audience itself.

Fancy getting your hands on some of the most useful metrics around? Grab a free seven day trial of Locowise all for yourself. You’ll be your client’s favourite agency.