How The Top European Football Teams Run Their Instagram Profiles

Instagram is, like much of social media, dictated by the presence of celebrities. Some brands work ridiculously hard to make a name for themselves on the platform and get nowhere. Others take heed of what seems to be working on Instagram and see real benefits.

However, there are still lessons to be learned, no matter how hard you work. And perhaps the best examples of ‘lesson givers’ are the sports stars and teams that grace the very top echelons of the channel. These guys know how to use Instagram to grow their brand, whether it’s a single multi-million pounds football player, or a club team from Spain. 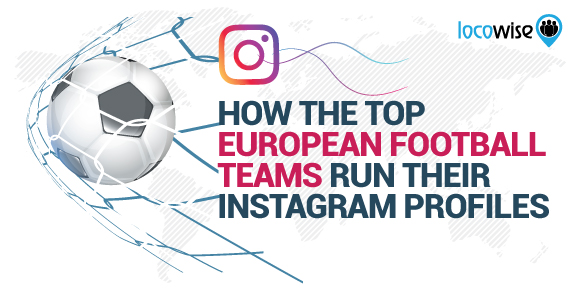 But first, some context. Instagram has long recognised its power in the field of sports. Instagram still has a relatively teen-flavoured user base, and much of that base is made up of rabid sports fans. The kind that will like a picture of Ronaldo reading a phonebook.

Instagram itself states that one in four users are sports fans. Or to put it another way, one of four of the top 100 accounts on the platform are sports teams or players. The channel now has, incidentally, over 600 million users. It’s a big chunk of followers.

This is a bit of a no-brainer even if you don’t follow football, but the top two teams on Instagram are Real Madrid and FC Barcelona. FC Barcelona has the highest number of followers of the two, with 44 million. Real Madrid is not far behind.

Predictably, the majority of the popular posts that Real Madrid and Barcelona send out on their Instagram are focusing on their top players. These are real personalities and they are linked to the teams inextricably. With these top personalities, Real Madrid and Barcelona will shoot photos of them working out, for example. Training pictures also work very well, and help to boost engagement.

Manchester United has also got what can only really be described as an incredibly healthy Instagram account with 15 million followers. They are kind of different from the Madrid’s and Barcelona’s of this world because their Instagram, while it has pictures of players and their training, also has a heavy reliance on another aspect of being a planet-conquering football team. The account happily shows pictures of the successes the team has enjoyed. So you’ll get photos of players holding cups aloft for example.

It’s also a very happy account, where players, and the manager, are often shown smiling and generally showing some real warmth. And the audience obviously responds to this, because the account keeps growing. It’s perhaps the perfect lesson on how to use Instagram as a strong brand.

Pick out the parts of what you offer that get the biggest positive feedback, and humanise them. The manager is popular and the account shows him laughing. Your players (employees) are a little crazy, so show them acting up. It feeds off of whatever your audience recognises and relates to, basically. 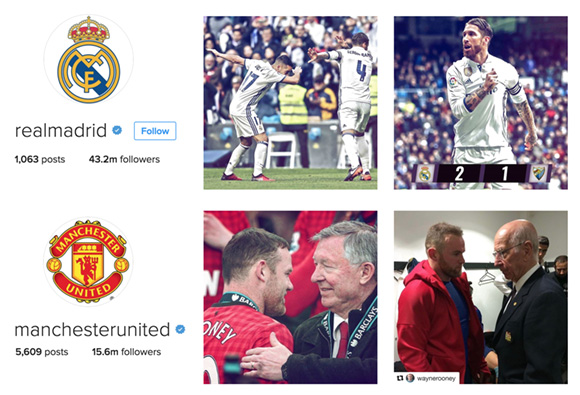 To be honest, every other sports team on Instagram kind of pales into insignificance against these three giants. But this doesn’t mean that the giants are bland and boring, resting on their laurels.

We’ve already touched upon how the main tactic is to use imagery that resonates with the audience. But there are other smaller things that these top sports brands do that make them pretty savvy users of the platform. They’ve worked out how to make even a shoo-in Instagram account lively and varied.

Quizzes and competitions are where it’s at. The most loyal fans around will want to show that they know their team inside out, so if you set them a challenging quiz on Instagram, they are going to rise to the occasion.

Recent sports teamwork on Instagram, for example, has focused on asking fans to name a footballer from a ‘behind the head’ shot. Or a tattoo being the only clue that the audience has. This works well because it shows who is a true fan and who isn’t. It rewards loyalty and intelligence at the same time. 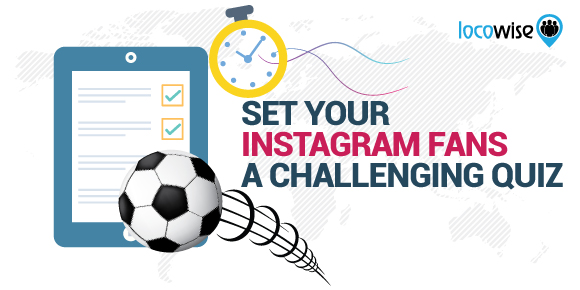 For the humble brand, think about how you can build in competitions that tax the brain cells of your audience. Make sure prizes are of a high quality and attractive enough, though, otherwise you’ll find that no one wants to play.

Football teams, and all sports teams for that matter are notorious for hiring new players every few months. They manage this (on accounts like the three we have highlighted) by continuously highlighting new signings and generally rejoicing in their good sense at hiring such talented people.

Guess what. You can do it too with a brand. The next time you hire someone, add that extra bit of humanity to everything with a short bio of your new team member. It just shows that you are proud of who is being hired, and that the brand cares enough to tell its audience about the new guy.

Social media is warm and fuzzy, the perfect place for the smaller brand to establish dominance over bigger players. When you hire someone new, get their personality across through Instagram, and that’s modelling yourself on the big sports teams. 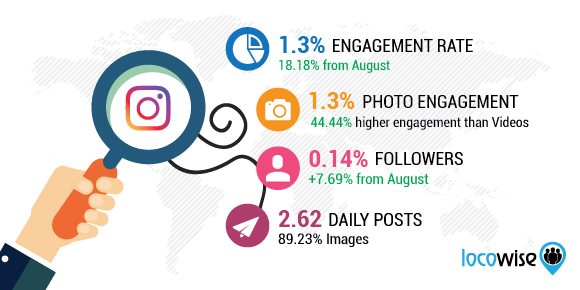 No big surprise here, but major sports teams are all about the hashtag. They know that the hashtag is a way of driving engagement, because once someone uses a hashtag, it’s engagement. Pull together a list of hashtags that work for your brand and make sure they are used on a consistent basis on your Instagram account.

Do what many sports teams do and link out to your Facebook account, so you’re going cross promotional too. But hashtags are a simple way of developing brand notes. Hashtags will eventually become associated with your brand, and that’s why you do it.

So, we found three football teams. Doesn’t sound a lot but they’re good at what they do on the platform. If we are going to pick out anything to take from the top teams here, it’s the basic message that your brand cannot hope for that kind of engagement. But don’t lose hope, no one else can either.

Instead, use the platform to take warm, happy photos of the people behind your brand. It’s a perfect place for competitions too. And master the hashtag so that people are always, always talking about stuff that you are linked to. 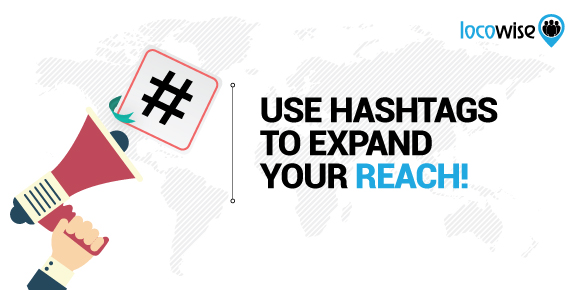 Like all things social, use your metrics and reports to know what is working and what isn’t. It makes more sense to do what works than bash yourself over the head with pointless tactics.

Want the very best metrics platform in the world at your disposal? Get it for free with our 14 day trial of Locowise. It’s the best, most comprehensive metrics bonanza ever.