How Not To Fail In Social Media Marketing - Locowise Blog

How Not To Fail In Social Media Marketing

Ever wondered how some people seem to own everything they do on social? All of the answers you need are here.

We’ve rounded up tips from three social media superstars, with practical ideas for applying them in your marketing.

Dan Wieden – The Guy Who Does Not Fail

Dan Wieden is an American advertising executive and co-founder of Wieden+Kennedy. He has worked closely with Nike throughout his career, creating what are arguably some of the most memorable ad campaigns of all time. 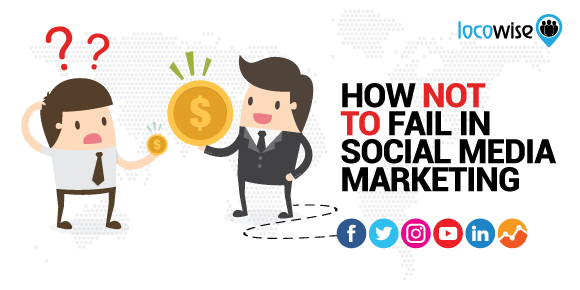 DHis agency is also responsible for Nike’s massive online success, thanks to a very different approach to marketing. When Wieden first met Nike’s co-founder Phil Knight, he was greeted with the words, ‘I don’t like advertising.’ This inspired Wieden to take a very creative approach to the brand. Nike ads were arguably the first to ever use the approach of ‘showing, not telling’ the consumer, and it has clearly paid off.

1. Earlier this year Wieden+Kennedy released a controversial PowerPoint called ‘How Not to Fail’. It’s well worth watching the whole thing on SlideShare but the key takings are:

● Consumers are not paying attention
● The advertiser’s main job is overcoming indifference
● And that this should inspire rather than depress you, because ‘all creativity demands resistance’ (in this case, resistance means being a part of what interests people by trying unconventional approaches to promoting brands and products)

2. Back in 2015, Wieden spoke to The Drum about the impact digital advertising was having on traditional agencies like his. The advice he had to give then as an early adopter of digital marketing is just as relevant now as it was then:

3. Social media managers all know this feeling – constantly watching the social landscape for developments that could be game changers for their clients. Wieden’s answer to the challenge: make the most of a fast-moving environment. ‘Because of the challenge, and because the reality is changing all the time it just speeds up your ability to be agile and creative.’

On his website, Gary Vaynerchuk describes himself as ‘One of the world’s leading marketing experts.’ He’s an American New York Times bestselling author and speaker who has been quoted in The New York Times, Forbes, The Wall Street Journal, and Mashable. Vaynerchuk is the founder of VaynerMedia, a digital marketing agency that caters to Fortune 500 companies. While he has some impressive clients, his best skills might lie in marketing himself. And no platform is off bounds.

Most impressive feat – Aside from writing four New York Times bestselling books and mastering just about every social platform out there, Gary Vaynerchuk’s most impressive move was probably adopting Snapchat before anybody else knew it was about to become a thing.

He had faith in the platform back in 2013, just a year after its launch, and he’s done so well adapting his no-nonsense self-help talk and plenty of self-promotion to the platform it’s impressive to watch. Long before Instagram and Facebook adopted stories, Vaynerchuk was using them to tap a new audience and gain a solid following in a social space that big brands like Taco Bell and The New York Times are only seriously jumping onto now.

Here’s Gary Vaynerchuk’s advice for all platforms, which he shared on a podcast hosted by Shopify geared towards entrepreneurs last year (it’s number 12 if you want to listen to the full podcast on iTunes).

2. Once you’re doing well on social media, stick with what’s working. On his own personal branding on social, Vaynerchuk says: ‘Yeah, maybe I want to take selfies that make me look thinner or cool, but I have to deliver on why they paid attention in the first place — and that means business advice.’

3. ‘Vaynerchuk believes that you should always follow users’ expectations on the platforms you’re marketing on. ‘Understand what the person is thinking when they’re in that platform. Reverse engineer that. Use your talent of communication and that’s how you break through all the noise.’ He suggests gifs on Tumblr, infographics on Pinterest, and smart hashtag use on Twitter.

On the topic of Snapchat, Vaynerchuk points out that unless you’re a celebrity, it can be difficult to grow your audience on the social network. Here’s how he did it:

‘The old fashioned way – without any sort of app-to-internet infrastructure. You have to use other methods to grow your account. For example, when I was growing Wine Library, I didn’t expect to grow fast on sheer discovery in the hopes that someone would stumble into the store. I used print advertising, radio, direct email, email marketing, and Google AdWords, to let people know where my business was. The best way is to use other platforms to help create awareness and direct people to your Snapchat.’

Tai Lopez is an investor and entrepreneurship guru with the ability to grow social media accounts at a lightning pace. He’s built himself an eight-figure online empire by doing digital marketing incredibly well – and courting more than a little controversy along the way (see below).

Lopez recently spoke to Entrepreneur about how he grows his social media platforms so quickly.

1) He believes in using what he calls the ‘PVP Formula’ in marketing: product, virality, and paid.

The first step to doing well on social media, according to Lopez, is to have a great product.

When it comes to virality, he says: ‘You have to employ controversy, humor and drama in your marketing. Look at the Kardashians and Justin Bieber: they evoke strong emotions in people and go viral. Once you have a hit product that’s going viral, invest in paid boosting. You’re not buying your way into the market; you’re just boosting existing momentum.’

2) Lopez also knows how important it is to have a different strategy for every channel. The way he describes it, ‘Twitter is high-frequency posting. Snapchat is like a TV show. Instagram is a museum showcase of your highlights. YouTube allows for long-form content.

And Facebook is a hybrid of them all.’ Treating each channel like its own entity is the way to succeed on every platform.

3) Lopez’ final piece of advice is: ‘Apply the PVP formula in the proper format and frequency for each channel and you’ll get huge results.’

What all social media superstars have in common is drive, passion, and great insight into how consumers’ minds work. Their approaches – and personalities – might be a little different, but Dan Wieden, Gary Vaynerchuk, and Tai Lopez all know their product, their audience, and their platforms, inside out. That’s how not to fail in social media marketing.

Would you like to know how far away your clients are from Fashion Nova’s level of success? Grab a trial of Locowise. It gives you the kind of data that helps you to help your client even more than you already do.