How Deadpool Harnessed Social Media To Create A Record-Breaking Smash

20th Century Fox’s movie adaptation of Marvel Comics’ foulmouthed anti-hero Deadpool is proving to be a box-office monster. It had the highest-grossing opening weekend of any Rated-R film in history and has already surged past the $500 million mark. A tidy sum, especially when you consider its relatively meager budget of $58 million (compare that to the $220 million it cost to make The Avengers: Age of Ultron).

Meanwhile, the response from fans has been overwhelmingly positive. Locowise’s word cloud analysis of comments on the movie’s official Facebook page pulls up the following terms: great, love, maximum, amazing, awesome, and… marketing.

Yes, people are talking about the marketing. Fox marketed the hell out of the film – particularly online, where they employed a variety of social media strategies to create a viral whirlwind of hype. Just how important was social media? Take it from Marc Weinstock, President of Domestic Marketing at Fox:

“This reaffirmed my faith in social media…There’s a lot of debate as to whether or not social media can really open a movie…and this proves it can.” 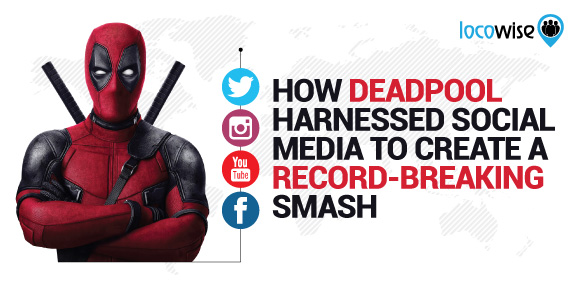 Clearly, social was a major component behind the film’s success. Let’s take a closer look at what made their online push so effective.

Viral video was arguably the biggest focus of the entire Deadpool campaign, and for good reason. What sets Deadpool apart from other comic book characters is his habit of breaking the fourth wall, often addressing the audience directly, and his irreverently vulgar sense of humor. These characteristics lend themselves so well to video, it’s hardly a stretch to imagine a social media campaign centered around the format.

Getting people to share your content is the essence of a viral campaign, and the Deadpool marketing team pulled out all the stops to make sure video viewers did just that.

A recurring theme of the promo clips was to have Deadpool, usually in a domestic setting, speaking conversationally to the camera. Without exception, the clips all invoked the character’s signature sense of humor for maximum shareability. In a genius move, Deadpool teamed up with anti-cancer organizations to deliver PSA-style videos about breast and testicular cancer. They fit perfectly with his persona – a cancer-stricken mercenary with a penchant for raunchy humor – while the important message behind the clips encouraged people to share. And share they did. The testicular cancer video attracted 5.9 million views, 126,000 shares, and had an engagement rate of 19.4% – astronomically high, even for a promoted post.

The marketing team also leveraged exciting new technologies to engage fans. On the day of the movie’s release, the Deadpool team took a stab at the new 360 degree video feature that Facebook launched last September. The interactive clip depicts a pub full of Deadpools, each doing something silly in a different area of the bar. The lighthearted and funny nature of the video, coupled with the novelty factor of being able to manipulate the viewing angle, pulled in more than half a million engagements, including 215,000 shares. The engagement rate? A whopping 15.6%. 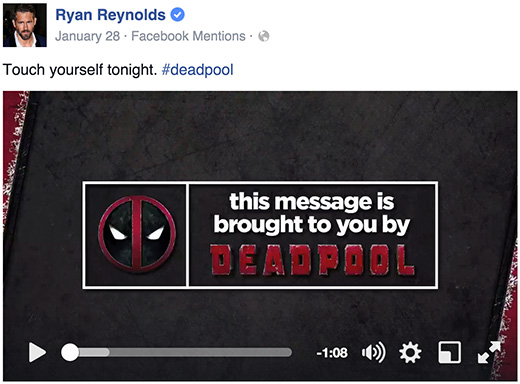 The film’s star, Ryan Reynolds, has been credited with much of its promotional success. And it’s true – while the film had its own dedicated social profiles, a significant portion of the online push came from Reynolds’ personal accounts.

Reynolds has a significant social media presence, with almost 2 million Facebook followers, 1.3 million Twitter followers, and 135,000 Youtube subscribers. That amounts to a lot of extra exposure, so it’s easy to see why they capitalized on this.

Most actors and actresses will use their social media presences to promote their upcoming films. But what makes this instance special is that Reynolds used his accounts to post original Deadpool content that couldn’t be found anywhere else, often in character. In fact, Reynolds became so invested in putting out content while in character that it triggered thousands of comments suggesting that the actor and the character had become one and the same. Not a bad way to sell a leading role. 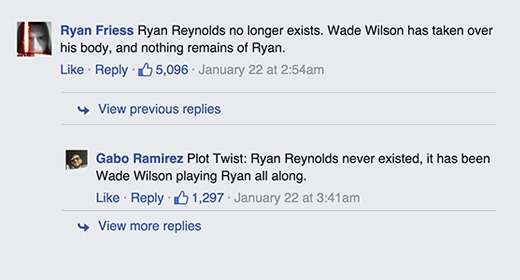 Content centered around a specific event is bound to garner a little extra buzz, and the Deadpool team made the most of this by hitting as many special days and holidays as they could.

The movie’s R rating was announced on April Fool’s Day during an interview with Ryan Reynolds, in which Deadpool appears and eventually ‘kills’ the interviewer. This Halloween clip, hosted on Reynolds’ personal Youtube account and featuring the fully-costumed actor joking around with young trick-or-treaters, racked up more than 4.5 million views. In the lead up to Christmas, the marketers orchestrated a lengthy stunt called the 12 Days of Deadpool – brand new videos, posters and funny images were released each day on a different major entertainment site, culminating in the release of the full red-band trailer on Christmas Day.

The team even capitalized on foreign holidays like Australia day. In fact, the Australia Day video they created performed remarkably well, attracting 3.6 million views on Facebook, along with 70,000 shares and almost 100,000 likes for an engagement rate of 16.7%.

The Australia Day video was just one example of the uncommonly heavy focus on social media content tailored specifically for international markets. Ryan Reynolds certainly did his part while on tour to promote the movie, posting a slew of content with dedicated city hashtags such as #DeadpoolDoesParis, #DeadpoolDoesBerlin and #DeadpoolDoesTaipei.

This post, specifically targeted at Taiwan and in the native language, is a perfect example of how international markets were given special consideration. Locals obviously appreciated the shout out, as it received 130,000 likes and clocked in an engagement rate of 14.8%. The movie went on to have the biggest ever opening for a Fox release in Taiwan.

The result of their efforts was a global online buzz. While most Twitter mentions of “Deadpool” came from the US and the UK, there was a fairly even split among other markets. The magnitude of this international conversation was ultimately reflected in the movie’s spectacular foreign box-office performance – Deadpool debuted at the #1 spot in 60 out of the 61 markets it was released in. 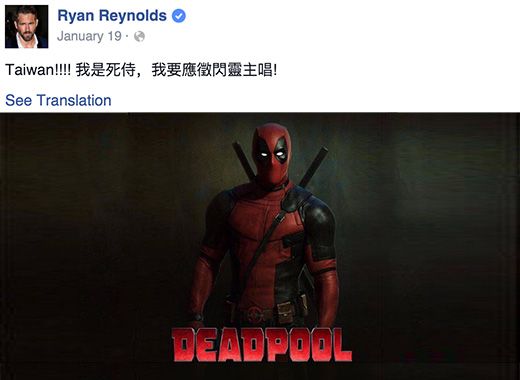 Want to measure the performance of your own marketing campaign? Locowise gives you hundreds of actionable insights so you can hit just the right audience with just the right content. Try a 14-day trial today, absolutely free.