Facebook’s 2017 Year In Review: What Marketers Need To Know

Every month we take a look at Facebook and its performance for the month prior. The insights we dig up are great ways to enhance the service you’re offering to clients.

Growth And Engagement In December

Facebook page fan growth in December 2017 was at 0.09%. Post reach was at 7.07% and post engagement at 5.63% of the people reach. Reach went down compared to November (7.79%) while engagement hasn’t changed from November to December. 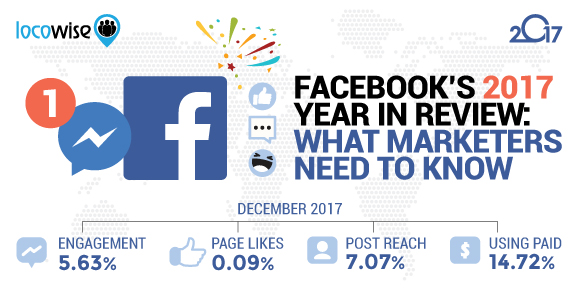 When it comes to engagement, photo engagement was at 5.51%, so no change from November 2017. Slightly better news came from link engagement on Facebook, which reached 4.28% in December, beating November’s 4.25%. Status update engagement was 4.8%, and in November it was 4.18%. Videos on the platform engaged 6.58%, an increase on the 6.11% in November.

Facebook Messenger’s Sean Kelly posted a review of the year on the platform on December 13th 2017. It threw up a number of interesting points, and one intriguing fact.

According to Kelly, it’s 25 years since the very first text message was sent. This fact alone should make a number of our readers feel ever so slightly older than you thought you were. That’s 25 years folks. Take comfort in the fact that it probably wasn’t you who sent it.

Quite rightly, Kelly highlighted the strides forward the platform has taken with video chat. He reminded us all that Messenger launched video group chat about a year ago, and that augmented reality features were also successfully popping up on the platform.

When it came to the number of conversations, the numbers kept racking up, with Kelly mentioning that there were over 7 billion conversations taking place on Messenger every day. Interestingly, Kelly focused on group chat, and how it had become a real thing in 2017. On average, 2.5 million new group chats were started every day on Messenger in 2017.

And as a little nod to those concerned about marketing and branding, he finished up with a quote that seems to point towards more business-friendly Messenger experiences this year:

‘…we are so happy to be part of your everyday lives and we can’t wait to help you chat longer, play games, take great photos or message a business in 2018!’

You can talk about video for as long as you want, but in the end, it has been pretty standard practice for video to be short, sensational and resonant. You may not be able to get all three of those all the time, but the ‘short’ bit has been recognised for its value for years now.

Buzzfeed is finding that it gets different results on Facebook if it uses longer videos. Some of them have been really long (by Internet standards), with their most talked about video of 2017 being the story of a Holocaust survivor, Eva Mozes Kor, called ‘I was a human experiment during the Holocaust’. The video was more than 14 minutes in length, and is sobering, to say the least.

The video was also a huge thing on Facebook, garnering 173 million views (that’s quite a lot) and becoming the most shared video in Buzzfeed’s history.

The testing that Buzzfeed does before it unleashes its longer videos is extremely effective. You can create pages for niche audiences, test videos there and then decide whether or not they require a larger audience. This is exactly what it has been doing.

Buzzfeed has also been thinking about its metrics very carefully. While in recent times it may have ‘obsessed’ over sharing and that metric has defined the brand’s approach, ‘watch time’ is now becoming a key area in the metric readouts. So a combination of very careful testing with verticals on niche pages, and a focus on metrics that the audience is showing are important, has led to an amazing 2017 for Buzzfeed and video.

We think the testing of niche pages thing is going to prove to be a major factor in video on Facebook in 2018.

This is a potentially big thing that Facebook is planning. The platform is currently testing a feature that allows advertisers to embed Whatsapp buttons in their ads, which will allow audiences to quickly communicate with the advertiser.

It makes a lot of sense, especially when you consider that some brands are actively using Whatsapp as a primary point of contact for audience members, including phone contact.

It isn’t going to go to a regular user’s page on Facebook, this new project is strictly business-oriented (for now anyway). It’s a great feature that’s currently being tested in pretty much all territories, except Europe. Most of Asia has it, as has North and South America, Africa and Australia.

No one really has a ‘newsfeed’

Nieman Lab pulled out an interesting study on December 18th, and it covered Facebook’s news feed. The study showed that a large portion of the Facebook audience of users saw hardly any real ‘news’ in their feeds.

The study looked at general news (national, political and so on) but also celebrity news, for example. So the study had every chance to prove the opposite of ‘no one gets news in their feed’.

In an era where Facebook consistently claims it is the best social platform for news, it looks like that’s exactly what it isn’t.

Facebook wasn’t all about the news, it was also talking about control in December too. With people generally becoming tired of seeing annoying videos that their uncle posts every six minutes, or the same funny cat post that’s been shared two million times, Facebook has finally decided to offer users a Snooze button, so that the time we spend on Facebook is ‘well spent’.

Possibly an even more urgent reason for brands to get engaging?

If you’d like to be able to give your clients the metrics and data they need on their social media performance (and we’re guessing you do) then try out a seven-day trial of Locowise, completely free.