What do zombies, drug dealers, and advertising executives have in common?

With services like Netflix and Hulu gaining in popularity, modern viewers are spoiled for choice. Today’s hottest shows are using social media to help bring in the ratings with concepts you can introduce to your own business. 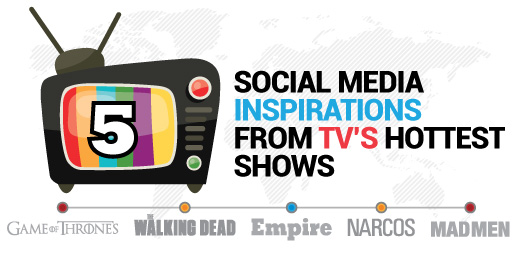 The Walking Dead’s popularity cannot be understated. Just ask their 33+ million Facebook fans. It’s safe to say a lot of people have good things to say about the zombie drama, and that’s something its marketing team has taken advantage of on social media.

Each week when a new episode airs, their Twitter account begins retweeting dozens of fan reactions before, during and after the broadcast. It’s a neat way to make your audience feel like a part of the experience, and it shows the world that people are talking about you.

Interacting with followers is so important to having a good social media presence, and this a fantastic example of how to do it.

Game Of Thrones – Presenting a serious show with a fun theme

HBO’s Game Of Thrones is well known for its dark, provocative and sometimes downright upsetting subject matter. The show’s most likeable characters never seem to stay alive for more than a season or two, and there’s no shortage of truly cringe-worthy violence. That’s what makes its Instagram account so surprising.

Every single post on its feed (except for one) features cutesy figurines of the show’s characters in various contexts. It comes off as refreshingly lighthearted. There’s no gore or sinister politics here – just plasticky fun, which makes for a much more appealing Instagram profile.

Sure, Game Of Thrones might be a TV show and not every brand can get away with having an Instagram feed full of toys, but a lot of businesses can learn from what they’ve done here. If you sell products or services that aren’t exactly cheerful in nature, consider presenting them in a way that is fun and original and you’re likely to see better results with your socials. Check out our article on Instagram best practices for even more tips.

The celebrated 60’s drama Mad Men may have come to an end this year (with a long-overdue Emmy for leading man Jon Hamm), but its social presence is very much alive.

It seems that the people at AMC, who also produce The Walking Dead, really understand the importance of interacting with followers on social media.

The show’s Twitter feed is full of responses to fan tweets, which range from shows of appreciation to witty quips.

It’s an endearing practice for any brand and it shows that you’re really listening to what fans are saying.

Netflix’s new original series Narcos depicts the rise and fall of notoriously violent and impossibly rich drug lord Pablo Escobar. It’s a fascinating premise to begin with, and one that has drawn the attention of plenty of viewers. The team behind the show knows this and has cleverly decided to emphasize the astonishing real life events on its social channels.

Using the rather clunky hashtag #Cokenomics, they post incredible historical facts about Escobar and the drug trade which create a real sense of intrigue around Narcos’ subject matter.

Take the post below, for example – that fact is so mind-boggling it just begs you to watch the show. People are drawn to larger-than-life statistics and facts so if you can use them in your favor, by all means do so.

The team behind Fox’s musical drama Empire isn’t afraid to try new things on Instagram. One of these ideas is their weekly #Scriptease post, wherein they reveal a snippet of the upcoming episode’s script. Essentially, it’s a creative play on the traditional ‘teaser’ and an interesting way to drum up excitement.

These posts might be getting below average engagement – after all, that’s to be expected for an all-text post on Instagram – but we applaud the team for having such a novel idea.

They also post a weekly #CookiesCloset picture that shows off the character Cookie’s wardrobe each week. The costuming behind the show is a large part of its appeal and these posts underline its association with fashion.

The captions even include a link to the Empire website, which has buy links for each piece of clothing so fans can recreate the outfits. Again, another fresh idea from the Empire team.

What can you learn from this? Don’t be afraid to try new things. Be creative. It might just pay off.

Key Takeaways:
Here’s what these hit shows are doing right on social media (and what you should be doing too):

Interact and converse with your fans as much as possible
If your product is ‘serious’, try a creative and lighthearted approach
Share attention-grabbing facts and statistics about your product
Don’t be afraid to try out new ideas

Already doing these things in your social media profiles? Great! The next step is to assess their effectiveness. Locowise gives you more than 200 metrics so you can optimize your social media content, and comes with an easy-to-use tool for creating beautiful reports instantly. Sign up for a free trial here.