If you’re just starting out on social media, I have good news and bad news for you.

Let’s start with the bad news.

Creating good content isn’t easy. In fact, most social media marketers – the honest ones, at least – will tell you that delivering high-quality content on a consistent basis is an extremely time and energy consuming task. As a brand, it can be very difficult to meet the rising expectations of today’s social media users, especially on platforms like Instagram where content is held to a dauntingly high standard.

Now here’s the good news: you don’t have to go it alone.

A lot of brands overlook the value of user generated content. Think about it for a second – your consumers are creating all the time. Turning to your fans for content inspires participation, engagement, and ultimately opens a two-way dialogue with the people you should be trying to connect with the most. 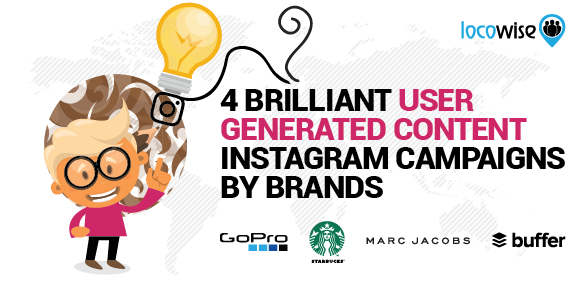 Plus, there’s plenty of evidence to suggest that consumers find user generated content a lot easier to trust than anything your brand puts out. A survey by Offerpop, for instance, found that 85% of participants thought visual UGC was more influential than brand photos or videos.

There are a number of different approaches you can take here. Contests, where fans participate by creating and sharing their own creations, are an especially popular option.

Simply reposting content can be highly effective too. Note: As a general rule, make sure to reach out for permission before reposting and always credit the creator in your post. For more guidelines, check out this article on reposting etiquette by SocialMediaToday.

Now that we’ve established the benefits of UGC, let’s get into some real world examples. Take some inspiration from these five brands that have tapped into the world of user generated content with fantastic results.

In 2014, Starbucks posed an intriguing challenge: decorate one of our blank white coffee cups and we’ll turn your design into a limited edition piece of Starbucks merch.

Unsurprisingly, their more artistically inclined fans were keen to get in on the action and they received almost 4,000 submissions in the three-week period.

The image of the winning cup design subsequently went on to garner a whopping 310,000 likes.

Starbucks followed up the success of the first campaign by creating the second competition the following year.

This time, the coffee chain showcased the talent within its own ranks by limiting participation to its own employees. This put a fresh spin on the concept, while also emphasizing the value they place on their staff. 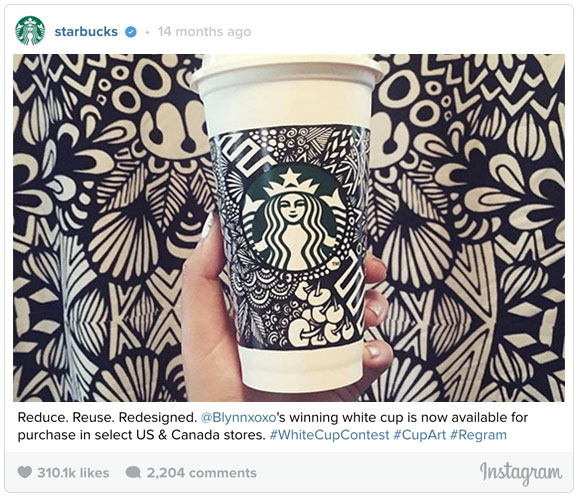 We mentioned GoPro’s excellent use of user generated content in our article on action sports brands, but it bears repeating. They’re just that good!

A product like GoPro, whose primary purpose is to enable people to create, lends itself particularly well to UGC.

There’s such a vast wealth of user generated GoPro footage that, quite frankly, it would be foolish not to take advantage.

The team at GoPro have certainly seized the opportunity by making reposted content a core part of their Instagram strategy and highlighting at least one awe-inspiring user generated image each day.

Their Photo of the Day series celebrates their customers’ adventures while showing off the camera’s capabilities. And for the rest of us following along, it’s a real pleasure to take in all the amazing content.

Everyone is a winner. 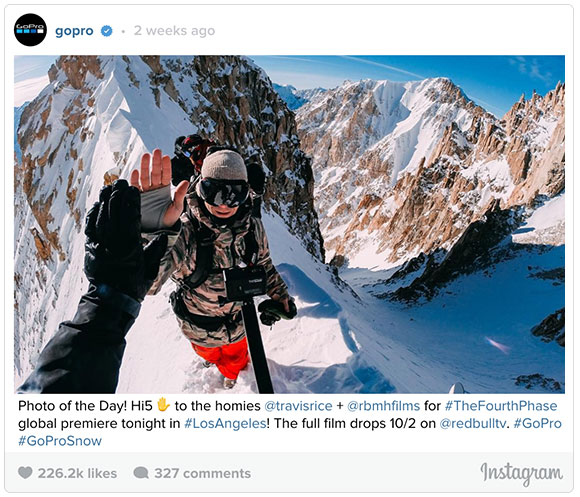 In their own insightful article on user generated content, the team at Buffer experimented with the concept and managed to boost their Instagram fanbase by an impressive 60% in a three-month period.

In doing so, they have created a rich visual narrative around the idea of a ‘digital nomad’ – a mixture of adventure images and quirky workplace shots that come together really nicely.

In the months that have passed since the publication of their article in May, their profile has grown by another 60%. It’s hard to argue with those results, and this stands as a testament to the efficacy of UGC as a core social media strategy. 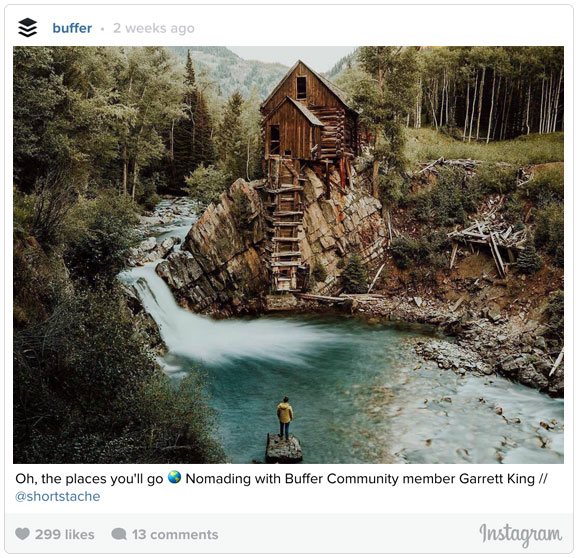 Fashion label Marc Jacobs created quite a stir with their #CastMeMarc campaign, which called for users to upload their own images using the hashtag.

We’ve seen fashion brands do this kind of things before – Calvin Klein had tremendous success with their #MyCalvins campaign – but what makes the Marc Jacobs campaign so special is the tantalizing prospect of being picked to model for the brand.

The ease of entering the contest, coupled with the potentially career-altering reward, meant that more than 100,000 submissions were recorded on Instagram alone.

That’s a pretty staggering result by any yardstick. 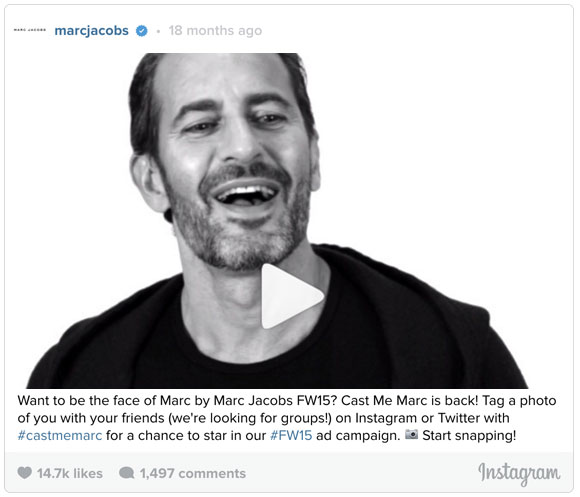