13 Lessons From The Biggest Football Accounts In Social Media

We’ve looked at 13 of the most popular, most engaging and most innovative football clubs and media in social media and collected some ideas and insights that you too can learn from. Use these as inspiration and lessons for your own social media channels and content.

The biggest players on social media are…

This player has had an amazing career to date, and he is now currently playing for Orlando FC. Prior to this he was creating goal magic at the mighty AC Milan and Real Madrid. So he’s not short of a few pennies.

On social, he’s completely blowing it up, with a huge Facebook fan base of 31 million fans. On Twitter, he’s equally accomplished, with 12.1 million fans. Slightly philosophical, and currently doing some genuinely meaningful work to help disaster victims, he’s an old soul on social.

On Twitter he’s gaining an average of 272 followers per day, and that comes along with 320 daily retweets. He’s popular, and we like the fact that he’s genuinely committed to tweeting interesting stuff.

Okay, everyone knows who this guy is. He’s one of richest men in the world, as it happens, and is currently enjoying a huge following on social media. Fans wait to hear his every word and his tweets are particularly popular (even though he only recently joined Twitter).

Facebook is his playground though, and he has an incredible 50.9 million fans, (and it’s safe to say that number has just grown massively today). Smarter than you might think, he often has something interesting to say too.

So what does he do on Facebook? He posts on average twice a day, which is pretty good going for someone who must have an extremely full diary. He has more fans in Indonesia than anywhere else and he predominately posts photos (something that the football world on social thrives on).

This Brazilian is a young talent that just keeps offering value to his team and his fans. He joined Barcelona back in 2013 for a fee of over £50 million, and hasn’t stopped since. Always up for being stylish and still very young, he is often viewed as a bit of a teen heartthrob more than an accomplished footballer. But he has managed more than a few great plays and is widely tipped to become an international superstar in the years ahead.

On Facebook he’s unstoppable, with over 52 million fans and on Twitter he has just short of 20 million followers.

Not bad for such a young talent. 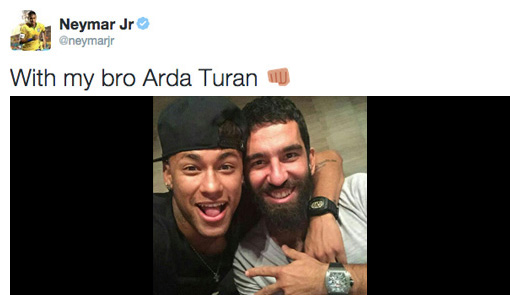 Messi has an absolutely huge presence on social media, and he is also one of the world-class footballers who have embraced social media more than most. He really has to be involved and this is evident with every interaction he conducts with fans. And there are lots of them, with Messi being able to enjoy the adoration of well over 75 million fans on Facebook. That’s a huge amount of people and means he has more fans than the population of some countries.

At the time of writing he doesn’t have a Twitter account, but is taken care of by a plethora of fan accounts that link to everything he says (and we mean everything), and he is generally showered with adoration. 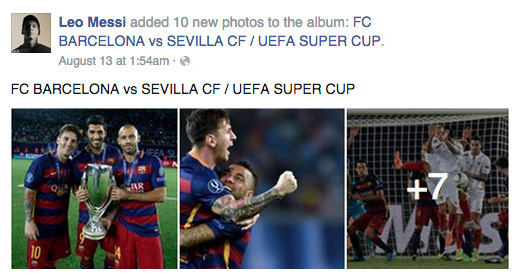 This guy is the biggest on social media, no questions asked. Compared to Messi he also has the advantage of having a significant following on Twitter too. On Facebook, he has over 103 million fans (just take in the figure for a second there, 103 million). Meanwhile on Twitter, his follower count is a little more down to earth (for a major footballer) and stands at over 35 million.

Why is this so? Well, he has undoubted charisma, and a fan following that has been legendary, especially since his last World Cup appearance. Also, he is a bit of celebrity as well, which always helps (ask David Beckham).

With an average growth of 60,000 fans every day, he’s mega-popular, and his daily postings obviously help to keep up that stellar momentum. As with most football channels, photos are the most popular post types by a long way. 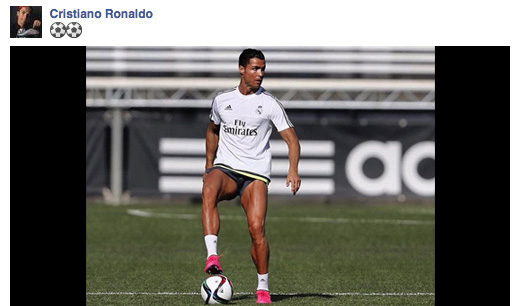 Some clubs get it right too. Sunderland manage this incredibly well and they have made a real habit of personalising their Twitter coverage, for example. A while ago, they used Twitter to honour their ‘club legends’, fans who had gone the extra mile. The tweets were personalised and really helped to illustrate the loyalty the club has towards its biggest fans.

Currently at 371K followers on Twitter, the club is a real one to watch in learning how to make social a community thing.

Manchester United: Innovative, and with a hub

Manchester United has long been seen as a bit of an innovator when it comes to managing the media. That’s one way of putting it anyway. But the club’s work on social media recently became even more stellar as it developed its own social media hub, pulling together all of the content from its various channels, from Twitter to Instagram.

Manchester City: Innovating their hearts out

Perhaps the most innovative club today is Man City. They have tried pretty much everything possible to become a true digital innovator. For example, they were one of the first major clubs to use FourSquare.

Their City Stories platform is an interesting way of bringing fans together with their own unique timelines that show real loyalty to the club. It needs a bit of work to make it flow better but we don’t really see anyone else doing this.

On Facebook the team has a particularly strong presence. They manage this through consistent posting (on average six times a day) and this is paying off with the average number of daily shares hovering around the 2600 mark. Their biggest Facebook audience? Indonesia. 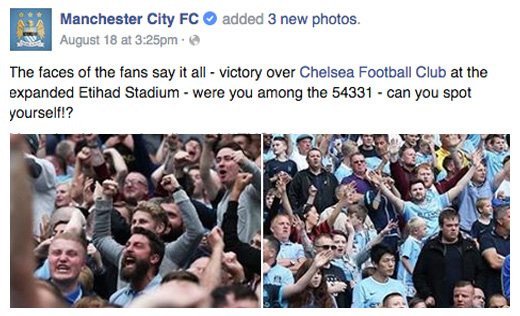 Liverpool: Keeping it real for the fans

If you’re looking for a truly inspiring example of a football Facebook page, then consider the one run by Liverpool FC. This club is truly international while retaining its Liverpudlian roots. For such a large club, the Facebook page still show shows a club that can stay engaged with its fans.

The club has a particular focus on great moments in its football history, as well as the history of great players in the world. Appearing humble and proud at the same time is a very difficult trick to pull off, yet Liverpool does this in style with Facebook

Come here for a club that has over 26 million fans on Facebook and handles all of the adulation professionally, and with a real focus on making sure the fans get what they want. 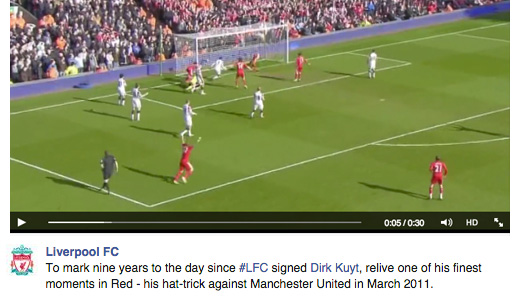 Okay, they are a huge team and they have a major global presence but they still find time to put in the work on social. Nearly every single post on their Twitter channel is a photo post, and it obviously works, with the average number of follower intake every day being 7,967. Yes, we know, that’s a big number, but it’s more a testament to the club’s popularity than it is the Twitter usage (the club had only ‘tweeted’ 692 times since the account was opened).

However, even with a low level of tweeting the club recognises that their fans want photos of Barcelona action, and lots of them. So, in a true business-like way, that’s exactly what they have given the fans. Again and again. 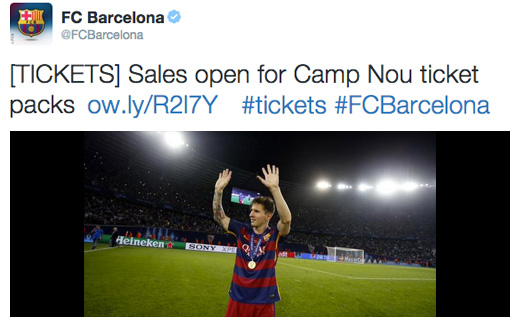 Another huge team and one that understands its fans very well. On Facebook the team has an average growth of 3,375 fans every day. This is no small concern.

The post rate is good too, with an average of 2 posts a day ensuring that fans get the content they need. Football fans are notoriously picky, and not giving them what they want will close a site down quickly.

They post photos four times more than they do the next most popular posts type, which is a link post, and this again proves that football is all about imagery and a focus on the players and what they do best.

With over 30,000 daily interactions, they’re not too shabby on engagement either. 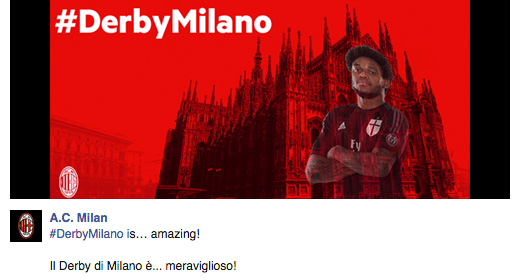 The culture of football

Football wouldn’t survive without the fans and the industry all around it. Ever since football became the major industry it is today, fans have been clamouring for a source of information that is a step above the old-fashioned magazines and newspapers. Step forward social media, with a ton of pages and platforms that offer the latest football news and information on an up-to-the second basis.

One of the biggest football focussed pages on Facebook is Football news. It has nearly half a million fans and is legendary for the latest football news it provides to followers of the beautiful game. It’s less of a fan site and more of a thorough overview of European football, and it is very well stocked with the latest news and facts. People love it and it is generally seen as one of the best football news sources online, not to mention social media. 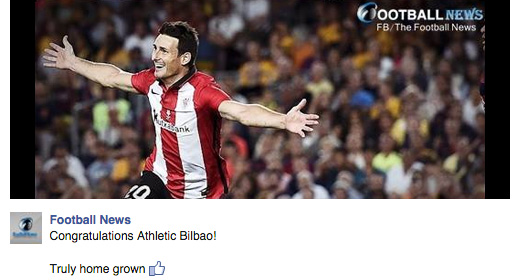 Match of the Day: Footie Heaven

Still the undisputed granddaddy of punditry, this Twitter account has all you need for football news and plenty of opinions and comment. It also has a legion of followers, with the current count being 1.48 million (it follows just 36). The channel is always full of great content, and fans obviously like the fact that the news is current and always supported with high quality images. 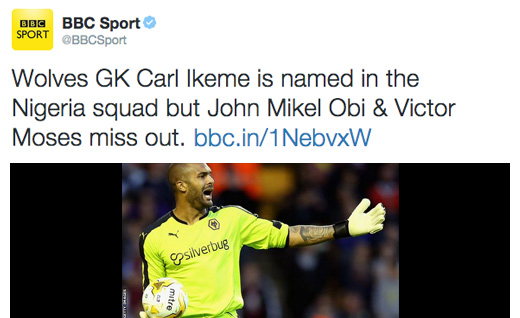 Football truly is a beautiful game, but it is also showing real prowess when it comes to social media. From top players that use social like a fan centre, to clubs that genuinely offer value, there is plenty to see and engage with.
If you need some of the best metrics available on your social channels, with up to the minute data that allows you to know what is working and who is following you and your vibe, try a free LocoWise trial right now