Facebook is by far the largest social media platform available today. With over 1.49 billion active monthly users, the network has managed to achieve noticeable growth and is still the platform of choice for social media marketers.

Despite the scare with sudden drops in engagement in previous years, Facebook proved to be a trendsetter by first introducing video, which now has the biggest engagement rate of all post types with a 6.8% engagement rate.

With all that in mind, the fact that all major world brands are on Facebook doesn’t come as a surprise. And even though it can be argued which of the global brands has the biggest social media influence, we decided to pick the top 8, based on likes, engagement and post reach and see how they compare with one another.

For the purpose of our Facebook Market Audit, we have chosen 8 brands, which include Red Bull, Coca-Cola, YouTube, Facebook, Converse, Disney, MTV and PlayStation. Even though all 8 companies vary in industries, they are among the most popular on the social media platform.

As the main brand for the page report we have chosen the brand itself due to its sheer number of page likes. Without further adieu, here are the top 8 brands that run Facebook in the month of August. View the full audit here.

Red Bull is by Far the Biggest Brand on Facebook

Sometimes numbers are mesmerising and impressive. Such is the case with the total number of followers shared by the top 8 brands on Facebook which surpasses the 515 million mark. Out of the bunch, Facebook holds 37% of the total audience on its own boasting over 190 million likes. Its audience grew 22% faster compared to the remaining seven brands in the month of August.

The top brand on Facebook for the month of August, based on engagement, growth and other metrics, is Red Bull with a total Brand Score of 75. The silver and bronze go to YouTube and Facebook respectively, with Disney taking the fourth spot. What’s surprising here is that MTV has managed to surpass both PlayStation and Coca-Cola, with a score of 66, while Converse takes the last spot of the bunch. 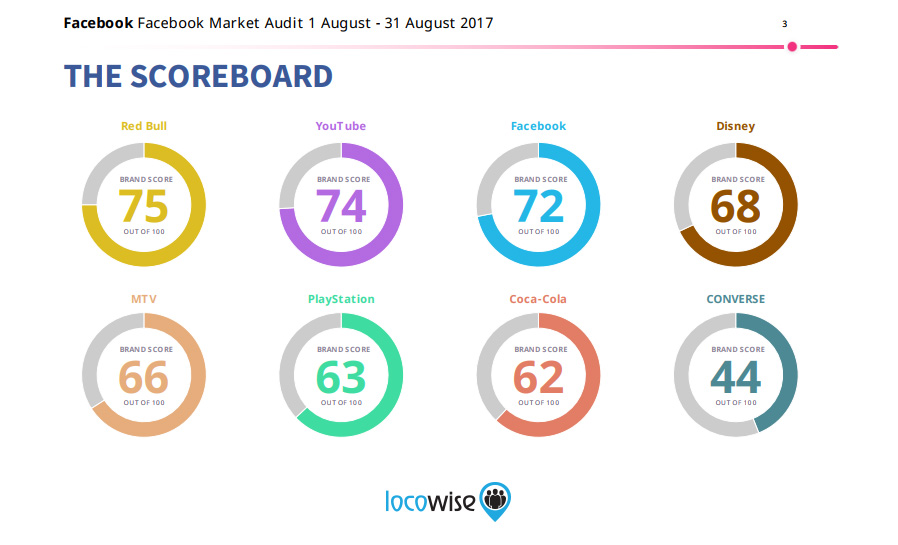 Of course, the reason why MTV is in our August list of top Facebook brands and why it takes the fifth spot surpassing brands such as Coca-Cola and Playstation is the MTV Music Awards event. Arguably one of the biggest music events of the year, the awards managed to bring a lot of attention to MTV’s Facebook page, resulting in a boost in both engagement and sentiment.

Even though Facebook has only posted once on its official page in the month of August, due to the engagement of that post and the growth in its audience, the brand managed to take the bronze. For YouTube, part of the score came with “Despacito” surpassing three billion views on the video sharing platform and the post of that milestone announcement on Facebook receiving noticeable engagement boost as well.

Both the reason for Converse becoming one of the top 8 brands on Facebook in the month of August and it taking the 8th spot with a score of a mere 44 is the surprise Converse event that took place early in the month. The announcement of the new “Converse One” in addition to other news was shared on the social network resulting in an increased reach for the brand. However, Converse did little to nothing to post on the social media and their posts themselves didn’t receive enough engagement, hence the lower score. 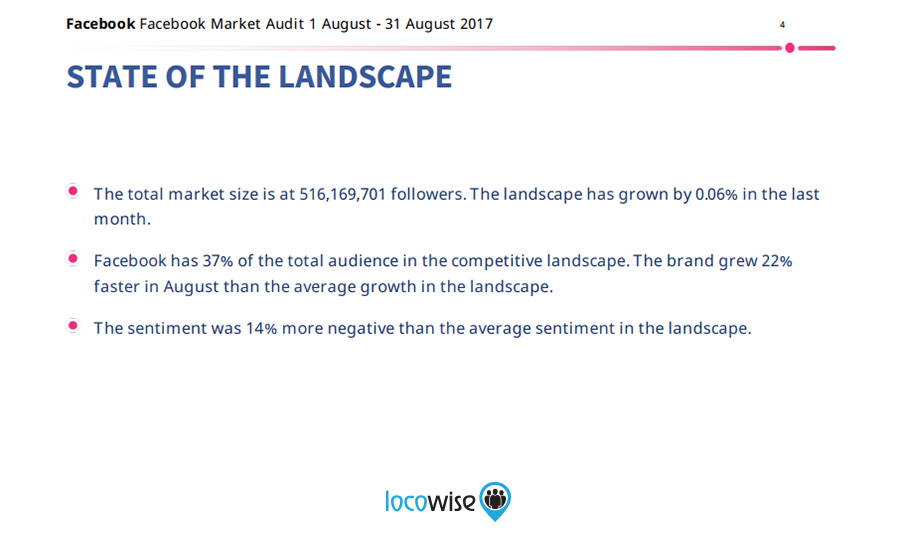 What can you take from this?

What these results go to show is that what’s happening outside of social media does matter for a brand. In the day of a social media marketer, we can often get too involved with the numbers and analytics of our social media performance. However, we shouldn’t forget that the whole of a marketing campaign of a brand including news announcements and events can have a huge impact on the performance of said brand on the social network.

Disney and Converse Hold the Sentiment Scoreboard, Red Bull has the Most Liked Post

The audience sentiment scoreboard shows a steady picture of how brands are perceived on Facebook. The first place for the month of August, out of the top 8, is taken by Disney. Having in mind the influence of the brand in the media landscape this is not surprising. In fact, most, if not all, of the posts shared by Disney featured either an intellectual property of the company, primarily movies, or actors that star in such movies.

The second place in sentiment is held by Converse. As aforementioned, the shoemaking company released their new sneakers and held a surprise event in the beginning of August, both of which were perceived extremely positively. This is noted in the sentiment score on Facebook as well. 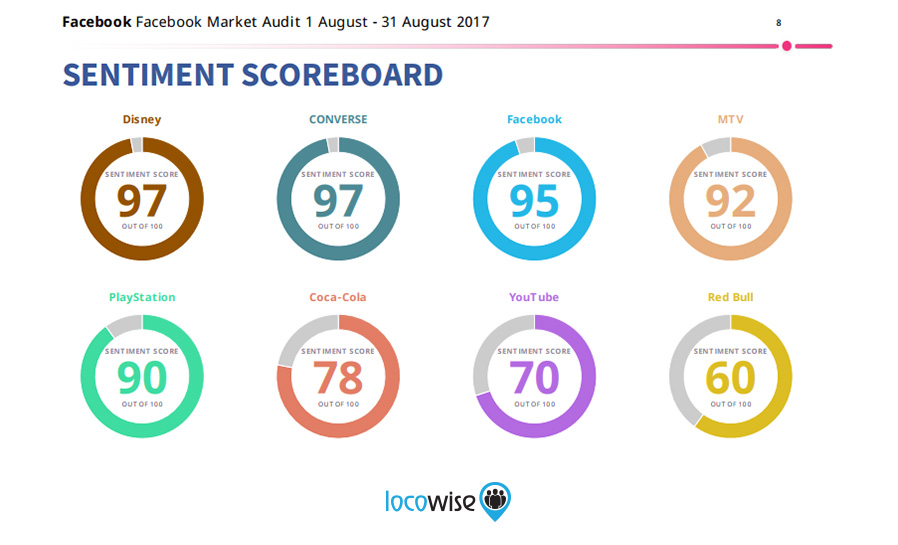 The bronze here is held by Facebook, which is then followed by MTV, PlayStation, Coca-Cola, YouTube and Red Bull. The overwhelming positivity towards the social network brand is a bit surprising, having in mind that during the month of August, the company shared only one post. However, the sentiment might stem from the fact that the brand is on its home turf. MTV’s score is once again backed up by the VMAs, while PlayStation, Coca-Cola, YouTube and Red Bull were a bit controversial.

Despite having a sentiment score of 60, however, Red Bull did manage to achieve the biggest number of likes and shares for a post in the month of August.

The post in question has received over 199 thousand likes, which is more than 3,340% higher than the average number of likes on a Facebook post. A stunning and breathtaking video that shows the point of view of an eagle over the Alps was also shared over 210,000 times, receiving a total engagement of over 424,000. Of course, this is only a 0.88% ER for Red Bull, but is nonetheless noticeably higher than what the other top 8 brands on Facebook scored.

The only post that comes close to the numbers of Red Bull is the post with the highest number of comments. It comes from MTV and is a video of the red carpet during the VMAs. It received a 0.09% ER with over 12,000 likes and 42,000 engagements, which comes from the high number of comments of over 27,000.

What can you take from this?

The sheer number of likes doesn’t paint the biggest picture. Out of all top 8 brands, only Red Bull managed to achieve an engagement rate higher than 0.10%. What’s more, they did so with a video with a high viral potential. The other item to notice is that posts with the highest number of likes, shares and comments from all top 8 brands were videos. 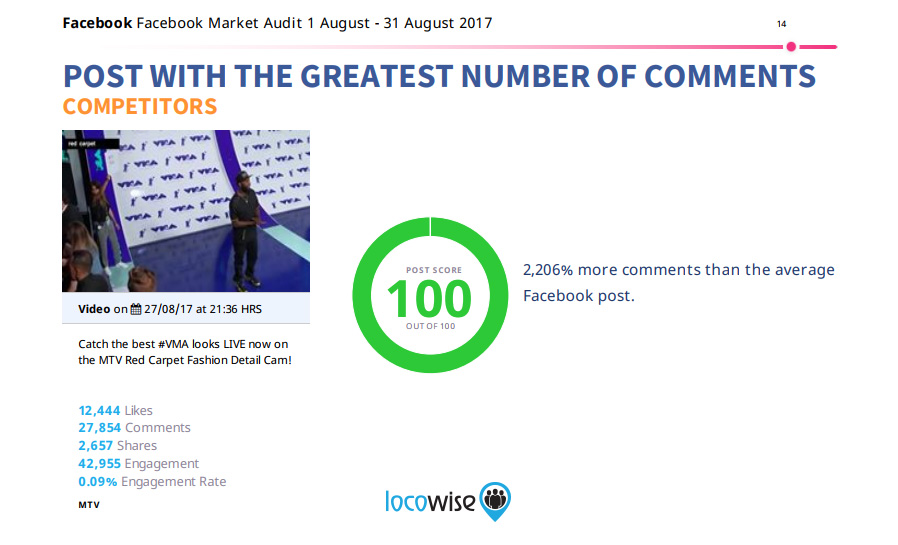 Does Real Life shape Social Media or is it the other way around?

The analytics and the Market Audit of the top 8 brands on Facebook paint a clear and concise picture. Social media posts can achieve huge engagement numbers, but that does little to nothing for the brand itself. While for a smaller brand, a Facebook page can help with the humanizing aspects, for an established company the story is that much different.

Take Red Bull for example. While they had the post with the biggest ER of all top 8 brands on the platform in the month of August and took the first spot in the overall score, their audience sentiment was the lowest. The main reason for this is that while a Facebook post can lead to a social media PR disaster, it rarely changes the established perception of the audience for a given brand.

In addition, while you can announce news via Facebook for a smaller brand, the already established brand is primarily driven by what’s happening outside of the social media. This can be seen both with the VMAs example from MTV and the Converse shoe announcements.

Despite not posting as much on Facebook, Converse did manage to increase its audience and received a great sentiment score, because of their event and newly released shoes. It’s the same with the VMAs. The music awards are so big that it wasn’t Facebook that brought attention to them, but rather the VMAs brought more attention to MTV’s Facebook page.

Want to see the bigger picture for yourself? Check out our full Market Audit of the top 8 Facebook brands, or start a 7-day free Locowise trial and create your own industry Market Audit.