The Difference Between SEO And SMM Traffic: What Every Business Should Know - Locowise Blog

The Difference Between SEO And SMM Traffic: What Every Business Should Know

The two leading services in the digital world, these past few years, are search engine optimization and social media marketing.

Often, both are aimed at increasing the traffic of a website, related to a particular brand and/or business. And while both are valuable in their own manner, the end-goal website is usually optimized to best suit search engine traffic.

Yet, to best increase your chances for conversion and tangible goals, you should aim at having a consistent content and web optimization strategy that deals with the subtle differences between SEO and SMM traffic. Don’t know what we are talking about? Let’s dive a bit deeper into the topic at hand. 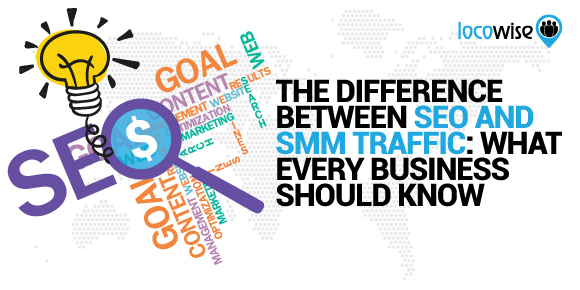 One of the biggest mistakes businesses do when indulging in a social media campaign is lacking a clear purpose when doing so. At often times, in both the physical and digital space, decision makers are oblivious to the actual purpose of a trendy new business practice. This couldn’t be more clear in the age of social media and website optimization.

On the surface, both Search Engine Optimization and Social Media Marketing aim to deliver more traffic to a website. For most businesses, traffic and conversion are two tangible metrics that help them make a decision on what digital strategy to pursue. And in most cases, the long-term results of SEO are undeniable compared to the short-lived traffic boosts of social media.

However, where social media shines, is in the brand building department. While you can target a specific keyword and optimize your website to better represent your brand, the limitations compared to social media platforms are obvious.

Using Facebook, Twitter, Instagram and the like, a business is able to expand their operations via brand-based marketing that often translates into increased reach and recognition. Depending on the goals set for a particular period, bigger investments in one of the two options might be better for a business.

Excluding the different aspects of both digital services, in terms of traffic to a website, both have certain pros and cons.

For starters, a social media marketing strategy can result in a huge boost of traffic for a short period of time. Yet, for the increase to be retained and the growth to be consistent, the strategy requires heavy resource investment on a regular basis.

The moment relevancy is lost, no matter the size of the achieved audience, it’s pretty tough to get the same engagement without post promotion i.e. as long as posts are made regularly, traffic will and engagement will increase, but the moment this stops, both metrics will fall rapidly. 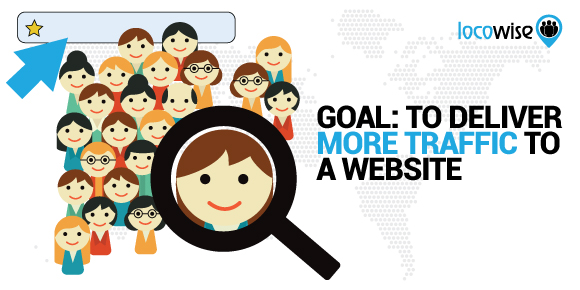 At the same time, Search Engine Optimization is an investment that requires long-term commitment for a period of time with results, which can only be noted a few months in. However, the results achieved with SEO are often retained for a long period of time and can be maintained relatively easily without heavy resource investment.

The downside of SEO comes with the fact that the traffic is expected only through natural searches, which are outside of the control of a business. With SEO you are pretty much dedicated to the target audience of your choice and don’t have any flexibility in terms of content.

Plus, changes in the brand, operation and even products can highly affect your SEO strategy.

Working as a social media influencer or as part of a digital marketing agency, it’s your job to help your client realize the potential of social networking platforms. Instead of focusing solely on the platforms themselves, try and evaluate the bigger picture. Offer insights into audience behavior your client can’t get anywhere else. Provide them with detailed analytics of how increased social media performance leads to better tangible results.

There are a number of ways in which social media traffic differs from SEO-driven organic traffic. Let’s discuss the matter a bit more in-depth.

One of the biggest differences with traffic comes from the very notion of how people use search engines versus the interactiveness of how they engage with social media platforms. Search engines are often used for research purposes and are the first service people engage with when they need to find particular information about a certain subject matter. The same is true for individuals who seek better information about a service or a product.

Social Media is quite different in a sense that people aren’t searching for anything specific in particular. Instead they visit such platforms for a variety of purposes, which often go back to entertainment and socializing. In a sense, people are actively engaged.

That’s why traffic that comes from social media is usually related to a prompt interest in particular content. The difference is that this doesn’t reflect any long-term interest or potential for long-term commitment. When it comes to website optimization, it is best to think about social media traffic in terms of quick and impulsive decisions.

The most obvious examples would be that of a tech-savvy individual versus a fashion-driven person seeking new apparel. In the first case, the usual way an individual would pursue a purchase would be through research of different products and specification or service comparisons. At the same time, the latter would often be an impulse purchase driven by both brand recognition and personal tastes. It’s rather obvious that in the first case, SEO and conversion optimization for web-based traffic would be better, while in the second a social media marketing campaign might be the best choice.

The second difference is that social media is highly personalized. This leads to traffic, which is heavily invested in the particular topic at hand. The same can’t be said for SEO traffic.

While this might seem to be contrary to what’s already mentioned, it’s nice to note the difference between a long-term commitment in terms of research (with SEO) and lack thereof (in terms of SM), when it comes to particular topics. At the same time, an SM visitor is highly invested in a particular topic, due to the personalization of social media platforms, which is not true for search engine traffic.

The best way to note the difference would be via the example of a person interested in the latest smartphone tech. When visiting social media, the individual would have a personalized experience towards smartphone technology, showing their heavy investment in the industry.

Yet, a person who searches for “Samsung Galaxy S8 review” on Google, which is one of the latest flagships, isn’t necessarily particularly interested as much in the industry of smartphone technology.

In fact, they can simply be making a quick decision of whether the smartphone (Galaxy S8) is a good purchase. In a sense, the search engine traffic is dedicated to specifics, while social media traffic is personalized and generalized, but can be analyzed to a far better degree.

The Visitor Who Has Already Been Engaged

Last, but not least, with social media, a business is receiving traffic that is already engaged. Think about individuals clicking to learn more about a service, after being prompted with an ad on Facebook.

The SE traffic usually has to be presented with more information, in the introductory sense, about the business and it usually takes more time for them to translate into a conversion. At the same time, the traffic that comes from social media has already been engaged with the brand and/or business to a particular degree and they don’t necessarily need to be introduced to that business/service/product at hand.

Depending on the marketing goals of a business, both SEO and SMM are valuable in their own respective ways. Yet, knowing the subtle differences can help you make healthier decisions about your business.

For example, it’s common for brands to promote webpage posts and links on social media without realizing that the optimization of the promoted webpage is aimed at SEO traffic conversion. This often results in high SM traffic with low tangible results.

To better evaluate the potential of a marketing campaign, it’s best for businesses to be familiar with how proper optimization can help them achieve stronger results. This can often be achieved through on-point analysis of the metrics and better differentiation between traffic source behavior.

Want to have access to all possible social media data in an easy-to-manage manner? We have everything you might need, including reports for the performance of your competitors, all in one place. Make sure to check out all the features of Locowise and how we can help you skyrocket your digital marketing and social media agency business to new heights.