Instagram Launches Threads In Latest Attempt To Bring Down Snapchat

Facebook has lots of money. It probably has more money to burn than any other online entity, which means it is allowed to make mistakes. Mistakes can be costly, but when you have the kind of money Facebook has, that’s just par for the course.

Facebook owns Instagram, and it has just released a completely standalone app called Threads. Threads is standalone, but it is an Instagram app. It just does things a little differently to the way Instagram does. 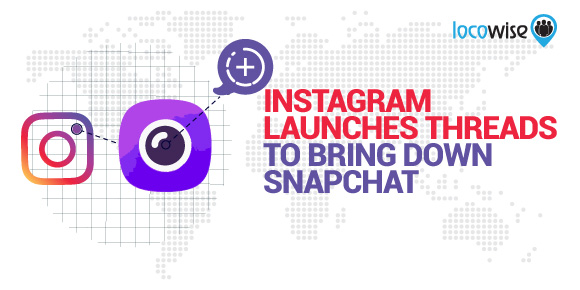 So what does Threads do?

Threads is a standalone app designed with privacy, speed, and your close connections in mind. You can share photos, videos, messages, Stories, and more with your Instagram close friends list. You are in control of who can reach you on Threads, and you can customize the experience around the people who matter most.

Threads opens directly to the camera. This is obviously a good thing and gives users a direct and efficient way to share videos and photos with their closest friends. That’s the point of Threads. Everything is personal and private.

The only problem is that Threads is very much like Snapchat. In fact, if you compare Threads to Snapchat, it’s almost spooky:

So it’s kind of weird. What’s going on?

The war with Snapchat

This is an epic story. Facebook has seemingly always had it’s eye on beating Snapchat. And over the last few years, even though most of us didn’t notice, it has consistently tried to mimic or blatantly copy what Snapchat does.

Way back in 2012 (yes, seven years ago), Facebook brought out a little app called Poke. It was meant to directly compete with Snapchat. It didn’t, and Facebook shut the embarrassing experiment down in 2014.

Slingshot was possibly Facebook’s most ridiculous attempt to beat Snapchat. With this oddity, you had an app that basically looked just like Snapchat. It didn’t work like Snapchat though. You would receive a notification that a friend had sent you a photo, but you couldn’t access that photo unless you sent one first. And that was about as simple as it got. It didn’t even last two years before Facebook binned it.

Instagram itself launched Bolt in 2014. This was a one-tap messaging app that again was similar to Snapchat. Unfortunately the app was tested in just three countries, then dumped.

Finally, Instagram started testing another camera-direct app called Direct back in 2017. That too, died a death.

So essentially, Facebook has been trying to create a Snapchat killer since 2012. Could Threads be the one?

Thread is a great idea, but it does basically mimic what Snapchat does. However, remember what we said earlier about money? A company that has so much money can afford to make mistakes, so even if Threads is a mistake it is still something that Facebook/Instagram can learn from rather than worry about.

If you have spent years trying to beat a competitor and failing, without any serious impact on your share price, you don’t have to worry. Instead, you learn from the feedback and keep going until the right product is delivered.

We think Threads is another example of Facebook trying to beat Snapchat. If it fails, it won’t hurt Facebook. But it could, weirdly, hurt Snapchat.

The more that Facebook tries to attack Snapchat, the more it will damage Snapchat. Snapchat’s share price will fall every time Facebook fires another shot at it. And it surely won’t be long before Facebook gets things right.

That’s the real issue. A company that doesn’t have to care about the financial impact of a huge product launch going wrong can keep trying until it gets it right. All those previous attempts at building a Snapchat killer failed. And Facebook and Instagram just came right back out of the gates to try again. Threads is not a bad product (anything is great compared to Slingshot) but it probably won’t be around in a few years time.

One day, however, the Snapchat killer will be real, and it will have the Facebook name all over it.

Would you like the chance to have great reporting on all your social media campaigns? Look no further than Locowise. We have detailed reports and some of the best overviews available. Try it for a free week.