Has Twitter’s Change Of Heart Worked? Here’s The Data

We absolutely love Twitter. It has become one of the most exciting places to be in social media. A lot of it has to do with the speed and pace the platform brings to engagement. Brands love Twitter too. They know it’s a great place for customer service. Engagement is fast and effective.

Twitter recently decided it wanted to change the rules a little. It can do that kind of thing, of course, because it runs the show. We’ve already looked at the experimentation with the algorithmic timeline. The platform has also decided to introduce “heart” button in place of the good old-fashioned star that everyone has known for years.

Most would consider this change to be cosmetic at best. If you’re not using Twitter that much your world would barely have been touched by the change. But if you dig a little deeper, there are some people out there that seem to think that the heart has done nothing less than change the social media landscape dramatically. Some like the change, many don’t.

We have the data so we decided to take a look and find out if introduction of hearts has changed the way engagement takes place on the platform.
Let’s look at the details behind this change first and move to the numbers next.

Twitter has its own version of events and it has a clear definition of what a heart means on its own site. To quote:

Likes are represented by a small heart. They are commonly used to show appreciation for a Tweet. You can see someone’s likes by visiting their profile, and your likes are also visible on your profile.

Then we get the gentleman known as ‘Chris Sacca’. Sacca is a Twitter investor. He’s put a lot of money into the beast so he will have some idea of where it’s going and what he expects it to achieve. People don’t put lots of money into companies unless they have some thoughts on their growth.

Sacca wrote an amazingly long piece that focused on where he wanted Twitter to go. You can read the piece here (give it an hour to digest fully). It discusses Twitter in great detail. The good thing about the piece is the fact that Sacca genuinely likes the company, not just as a cash cow, but as a kind of ‘mission company’. Read the piece, you’ll see what we mean.

Anyway, Sacca at one point in the piece makes it clear that he feels including hearts instead of stars will massively increase engagement on the platform. And this has had an impact. Many people have rated this piece of writing, and it’s well-known that Twitter executives have seen it too.

When was it written? June 3rd 2015.
When were hearts instead of stars first explored by Twitter? June 2015.
The official change from stars to hearts happened on November 3rd 2015.
Has it worked? Let’s look at that next.

Has the change to hearts worked?

Twitter feels it has brought an increase in engagement on their platform. Comments from Kevin Weil, their SVP of Product mention a 6% increase in activity for existing users and 9% increase for new users.

We took a look at our numbers to see if we can learn more. The results may surprise you.

27.82% increase in favoriting since the change

Have you noticed any difference in your engagement since the change to hearts? You can use our Twitter Analyser tool to have a quick look at how you’re doing.

Let’s take a deeper look into why some people are against the change to hearts. 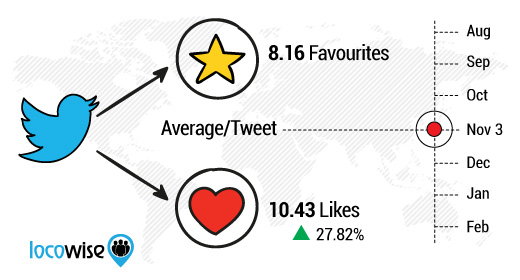 Stars or hearts: Some people are against the change

The word ‘like’ is where the issue lies for those who are against the new direction.

You go to a store, you buy their stuff, and after a few months you keep buying more of their stuff. Eventually, you begin to realise that you rate their stuff higher than another store’s stuff.

One day you stumble across a review site that is rating and collating all the reviews and info on stores like the one you have been visiting for months. The store in question is staring at you from your screen. Underneath there is a chance to click on stars, with five stars making it a highly rated store in your opinion, and one star making it a poor option.

Makes perfect sense right? Quality is gauged by the number of stars a provider gains. It has been like this for a long time and it works.

But let’s say that you look at the same store on the site and instead of stars underneath the details you see a group of hearts. Five hearts means… what?

That you love the store? That you are fond of it? Or simply that you rate it highly?

Twitter replacing stars with hearts is telling some people that they are changing the nature of how we interact with tweets. We no longer, according to these people, simply rate the quality of a tweet. We show our love for it and that is a whole new ball game.

The whole issue centres around the notion of ‘favourites’. If you star something you are giving it a favourite. This wasn’t that hard a concept to understand, but if you give something a heart you are showing that there is an emotional weight attached to that favouriting.

When does it go wrong?

People used to star stuff on Twitter because it was an easy way to lock onto tweets they wanted to check out later. When you are sifting through tweets and find an important news item you would star the tweet. You can simply come back to your favourites at a later date and in that way have your Twitter life pretty much organised. And that worked. It also meant that you were able to find tweets that were genuinely interesting to you.

This is a great idea for news-based tweets for example. People could simply star their notable news tweets that had floated into their stream and keep an eye on events. From terrorist acts to celebrity weddings. It made for an easier way to navigate the Twitter experience.

Twitter will have to deal with this perhaps. Doing this would mean categorising tweets and Twitter is all about self-expression. Pushing a tweet into a bracket and not allowing hearts while all other tweets get the chance to receive hearts… it just makes everything messy. For now we’re stuck with a new system that allows people to ‘spread the love’ about horrible news events. Take a look at the tweet that gave us the launch video. Watch the launch video and see why people are starting to think Twitter may have missed out on something here. The video is all about love and passion and all of that social media stuff that works on other platforms.

Our take? It’s a growth thing

Most platforms face bumps along the road of their growth. It’s about taking a look at what is going on and trying to change for the better without losing your core fans. That’s what Twitter is trying to do with hearts, algorithmic timeline and other experiments.

The problem for Twitter is that they have many die hard fans who love the platform as it is and don’t want it to change in any shape or form.

With Twitter continuing to slide on the stock market, is making their loyal fans unhappy a gamble they can take? They need to and first 3 months of data shows that the change to hearts has paid off in a big way.