So What The Hell Just Happened? (Facebook January 2018 Edition)

Before we dive into what happened on Facebook in January 2018, let’s as always crunch the numbers a little.

We’ve introduced a new grade card feature. We use our own judgement for three categories of metrics: reach, growth and engagement. The three areas are graded and then the platform receives a final, aggregate grade too.

This is our Facebook growth and engagement study for 5000 pages for the month of January 2018. 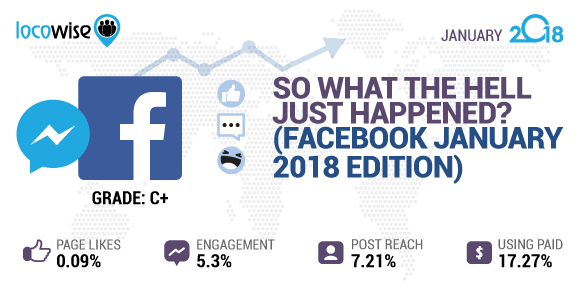 However, there was further improvement in link engagement on Facebook, which reached 4.68% in January, beating December’s 4.28%. Status update engagement was 4.24% while in December it was 4.8%.

Facebook page fans growth in January 2018 was at 0.09%. This was exactly the same as in December.

The boss made a resolution

Mark Zuckerberg made a New Year’s Resolution that he fully intends to carry out. That’s what he told the entire world anyway. And it’s all anyone has really talked about through January: https://youtu.be/oVi3bdaIi2Q

Mr Zuckerberg doesn’t like fake news and he really cannot abide spammers. Neither can most of the world’s population, but Mark knows that unless he protects his user base from evils such as spam, he’s going to have a bloated whale of a platform within a few years.

So he did something about it in January. As well as the news feed changes, he also focused on making sure that the platform prioritises’ news that is seen as trustworthy by the community, and informative too.

The outcome could well be a kind of shrinking of the platform so that it becomes very community based. We will see.

We have to admit, it’s nice to see even the mighty Facebook trip up now and then. The problem is, it doesn’t do it often. Many have been waiting a long time for it to make a mistake.

When huge tech companies make big mistakes they tend to just make the issues go away. Facebook has just done that with the removal of M. M was the artificially intelligent assistant that Facebook created and nearly gave to the whole world. It has failed because it wasn’t as intelligent as Facebook wanted it to be. Facebook said:

“We launched this project to learn what people needed and expected of an assistant, and we learned a lot. We’re taking these useful insights to power other AI projects at Facebook.”

Translation: we messed up.

This is something different. Facebook started testing Watch Party in January, and it’s exciting in that the feature allows you to share video with your friends, and then live comment on it again with your friends. The best way to explain it is to think of you and your friend watching a favorite TV show and discussing it.

Imagine watching Game of Thrones, for example, and having a private group that can comment and share the excitement while it’s on. It’s a fun idea, and comes close to what Mark Zuckerberg loves: video.

The Newsfeed Gets Scary For Brands

It’s not the end of the world just yet, but early January saw a Zucker Apocalypse take place for brands. Maybe.

Mark Zuckerberg announced that he wanted to make the news feed more relatable, by telling his legion of Facebook employees to reduce the amount of news people see from businesses in their feed. This means less content bringing in less ROI.

It caused a storm and a backlash, and everything else you would have expected it to:

If you decide to take a break from Facebook, the company is hoping it won’t last too long. Maybe they’ll accept a couple of hours, three hours tops.

Facebook has come under criticism recently for the way it chases after users who decide they don’t want any more Facebook. There have been recent connections made between depression and overuse of Facebook (mainly because depressed users see everyone else having fun and then they feel bad about their own seemingly empty lives) and Zuckerberg has got his new focus on friends and family posts.

Basically, Facebook wants to hold onto every single user it has. It can’t crack China (it’s banned there) and people are starting to drop off the platform. They aren’t dropping in any terrible numbers, but they’re dropping.

That’s why the customer retention tactics illustrated in this article feel a little creepy. If this were the 1980s, it would make for a really good conspiracy movie.

The DAU issue (USE IMAGE FROM DOC)

The last financial quarter in 2017 saw Facebook actually lose some Daily Active Users (DAU) in the US and Canada. This is a big deal, because everywhere else in the world went up and some regions went up in a big way.

This has been directly attributed to the reduction of the number of viral videos on the platform, and the new emphasis on seeing stuff in your feed from friends and family rather than a brand.

As Mark mentioned, certain product quality changes impacted our DAU growth. In the US & Canada, these changes contributed to a DAU decline of 700,000 compared to Q3. We don’t see this as an ongoing trend, but we do anticipate that DAU in this region may fluctuate given the relatively high penetration level.

It’s just a blip, not a trend. That means that at the end of Q1 in 2018, everyone’s going to be looking for blips. 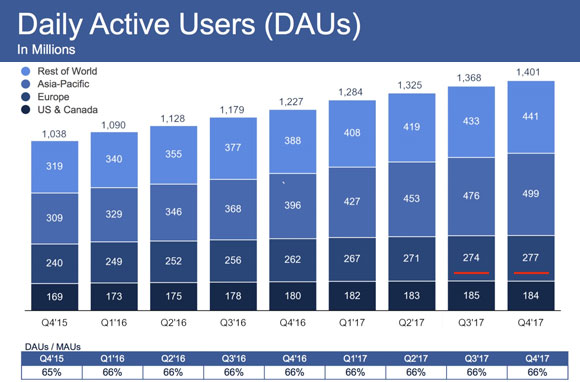 At Facebook, no one actually cared about the news feed change

At the HQ, the newsfeed change wasn’t the number one topic of discussion. Instead, people were thinking about other things. This article suggests that cryptocurrency needs more attention in the realm of Zuckerberg.

However, it also seems that there is an unsurprising backlash against Facebook. The company ostensibly wants to take a stand against fake news and bring more integrity to the platform. However, many commentators feel that Facebook itself both invented fake news and did nothing to stop some pretty nasty stuff happening on the platform.