One of the benefits of the digitalization of information is the huge amounts of new data to which experts have access. Today, analyzing the success of your social media marketing campaign is far easier than ever before.

With just a few clicks, you’d be able to know the engagement rates of each one of your posts, the sentiment of your audience and most importantly, the performance of your competitors.

Nevertheless, surrounded by all those numbers, we often forget that at its core marketing and advertising haven’t changed. At the end of the day, whether through a newspaper, the radio, television, a website or on social media, a marketing campaign is still a way to present your service, idea or product to the people that might have interest. 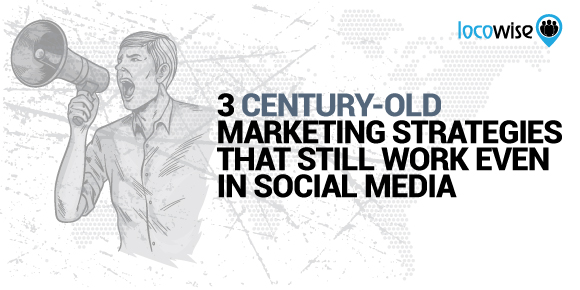 To take a step back from all the numbers and appreciate marketing better, we decided to take a look at some of the most amazing marketing minds of all time. Marketing as a study has changed, evolved and transformed over the years. Yet, there’s still a whole lot we can learn from the pioneers of advertising.

Sex Sells and There’s Nothing Wrong with That

The fact that sex sells is often perceived in a negative manner. Yet, the reason for this is mostly due to the oversexualization in marketing and advertising in the past couple of years.

While racy material is rarely successful in social media, as this year’s Mr. Clean sexy commercial shows, when an advertising campaign is done with a certain level of acknowledgment and awareness of the audience, the product and its own sexiness, it can be highly successful.

With that in mind and going back more than a century, we can trace the beginnings of Eye Candy marketing to its founder George Wilkes. A journalist, Wilkes is infamous for being the founder of the first pin up magazine, the National Police Gazette, back in 1845. Primarily targeted towards law enforcement, the magazine quickly attracted new audience due to its engravings and photos of scantily-clad women.

Entertain Your Audience to Sell your Product/Service

If there’s one thing that all social media marketers should be aware of, it is that entertainment leads to sales.

Increasing your engagement and reach via engagement through media content is at the forefront of what makes inbound marketing so successful. But, as with almost every other advertising strategy, its roots go back to as early as the 1900s.

Granted, we are still a few years off from this tactic becoming a century-old one, but in 1923 John R. Brinkley was the first man to successfully implement entertainment with the promotion of his service. Known as the father of broadcast advertising, Brinkley is also infamous for his fraudulent medical practices.

Thinking that the spam e-mails you receive for pills that claim to cure male impotence is a problem of today is just naive. And the story of Brinkley will prove you wrong!

Claiming to be a medical doctor without having an actual medical education, Brinkley performed and promoted a procedure of transplanting goat testicles to males as a means to cure male impotence.

Despite being criticized by medical professionals and scientists alike from the very beginning, with his medical diploma purchased from a diploma mill, the “goat-gland doctor” was extremely successful.

In fact, he operated clinics and hospitals in multiple states, until he was stripped from his medical license in several states. Beloved by many, he even tried to run for governor of Kansas two times with one of his campaigns being nearly successful.

And while his fraudulent medical procedures were highly illegal, what John R. Brinkley did for marketing and advertising is undeniable.

Back in the early 1900s, radio was nothing more than a cultural asset, free of commercials. However, Brinkley single-handedly transformed the way we engage with entertainment when he built his own radio station in 1923 for the sole purpose of promoting his procedure.

The reason why he was beloved by many even after his procedure was proven to be fraudulent was due to the success and the entertainment value that came with his broadcast advertising.

The quack physician didn’t simply sell his services. Instead, he booked and played some of the best country music acts of his day, performed bible readings and even had his own catch-phrases with the most memorable one being “You’ll be a ram-what-am… with every lamb.”

Of course, quackery and snake oil weren’t anything new under the sun. Nevertheless, the way he managed to transform the media in the form of the radio to an all-round brand promoting platform is highly similar to what brands on social media do today. Granted, at least most brands promote honest products and services.

At times, the history of advertising and marketing might seem rather vile and immoral. And for the most part, that’s true. People striving to achieve a quick profit while disregarding the very thing that makes us human are often the ones that beat the system and think outside of the box.

And while we can’t support fraudulent practices, we can use the tools and strategies used by Brinkley in a moral manner to make our content more humane and engaging.

Having a person with a following introduce your product or service to their audience is a highly beneficial tactic used in almost each and every industry on social platforms today. Yet, back in the 1900s, this was unheard of until the strategy was pioneered by Lily Langtry.

While the name Lily Langtry might sound unfamiliar to you today, a century ago, she was much like the Madonna of her time. Establishing her reputation as an actress and a producer, Langtry was constantly in the public eye for her numerous sex scandals and relationships with noblemen.

Using her persona to boost her personal brand, Langtry was one of the most popular actresses of her time. But she was also a great marketing pioneer.

Understanding the value of her persona, Langtry added her name to a line of cosmetic products. As the diva she was, instead of money, she preferred getting paid in gold. In fact, she charged the cosmetic firm the fee of her weight in gold bars for her celebrity endorsement.

Of course, today things have evolved and transformed in various ways. While direct endorsement is still popular, promotion via social media tends to be a preferred ways for brands to promote their services and products. Plus, social platforms have made it possible for normal people to gain an audience, resulting in the rise of the social influencer. Whatever the case might be, we have to thank Langtry for pioneering this amazing marketing strategy.

The above stories are dubious in nature. As a whole, the marketing industry is much like a coin. On one side, we have the immoral individuals that take advantage of human emotions, while on the other the honest and helpful advertisers truly shine.

Whatever the case might be, it’s true that those who manage to think outside of the box are truly successful. And as mentioned in the very beginning, marketing evolves for a reason.

While advertisers had the chance to lie and deceive people, in the informative age we live in, this is harder for them to do. People are becoming more aware of the different practices used by advertisers. What’s more, with the sheer number of similarities in such advertisements, people start to be more ignorant towards them.

Social media and inbound marketing are increasingly popular for a reason. They let people learn more and be more trustworthy of brands, while the social platforms allow marketers to be more honest, open, direct and engaging to their audience. Social Media Marketing promotes honesty, creativity and outside of the box thinking. Yet, this doesn’t mean that we should ignore the past. Quite the opposite.

We should learn from the pioneers of marketing and use this knowledge to the best of our abilities. And of course, when we are uncertain of whether or not a social media strategy works, we can always take look at the stats.